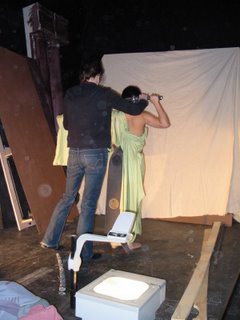 Yasmin Tuazon, actress, post card model, yoga instructor and Rorschach Company Member started the ball rolling with this one. Please note the beautiful Yasmin posing for the post card image on your left.

The challenge involves the poetry form called Tanka which is featured on the Poem Cards from which the play Fair Ladies takes its name. The rules are simple syllable pattern of 5-7-5 7-7. Many of the cast have contributed their own Tanka since the gauntlet was thrown down so here is the collection thus far and Yasmin’s original challenge.

Last night, while learning how to play poem cards, it became apparent that further study of the Tanka form was required. It was proposed that rehearsal reports be recorded as tanka. I hope this will be the first of many, as the cast swims deep in the warm discipline of syllabic verse.
____________________________

We slide on our knees
across the new floor without
hesitation. No splinters!

In the name of poetry, I will not restrict anyone from writing Tanka about subjects other than rehearsal. Leaves, birds, the seasons, rice, certain flowers, Randy, and lovers rent asunder are still acceptable. But I strongly encourage people to work within the spirit of the play. Tanka about cheese are right out. Such verses may be reserved for the closing night party.

December air numbs
my fingertips, though I am
surrounded by walls.

Why doesn't the heat filter
into the rehearsal space?

Weekend plans evolve,
In sanctuary we meet
To rehearse our play.

The director wants to know
Are all actors off book yet?

Yasmin forbids poets
to praise the glories of cheese,
that most luscious food.

Tonase poops the party.
Do we call this typecasting?

Does the Moon have alzheimers?
Peasants slow down Yoko's search.

Up Mount Pleasant Street and then
Into warmth of Haydee's they go drink.

Craziness abounds
Inside my e-mail inbox
Tanka being shared

Does not anyone else have
Occupational duties?

Rehearsal madness
Leads to Haydee's and Guinness.
Feels like a snow day!

No longer mysterious
Drinking with Morotaka.

Paul:
(Not Tanka but instructive)

Grab a fence post, hold it tight,
Womp your partner with all your might.
Hit him in the shin, hit him in the head,

Hit him again, the critter ain't dead.
Wop him low and wop him high,
Stick your finger in his eye.
Pretty little rhythm, pretty little sound,
Bang your heads against the ground.

(courtesy of Bugs Bunny)
Posted by DCepticon at 9:02 AM

Not as witty but truthful...

drowning in costumes
kimono and hakama
how to tie obi?

deb! A practical tanka for you.


There's a book for you
I passed it on to Randy
Demand it from him:

In it, stencils for some Mon-
I hope that they are useful.