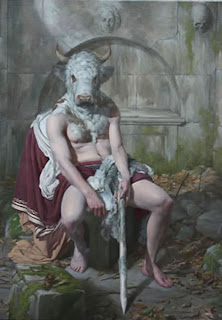 Long overdue report from the field...
The world premiere staged reading of Anna Ziegler's THE MINOTAUR was a huge success. More than 100 people joined us last week in the Family Theater at the Kennedy Center's annual Page-To-Stage Festival.
Funny and wise, Anna's take on the Minotaur myth strikes a nice balance between contemporary relevance and timeless themes. We were lucky to have such an amazing cast to bring the words to life. And the audience was great - engaged throughout and I even saw a few tears near the end.
Bringing new relevance to timeless tales is one of many things that excites us here at Rorschach.
The nice folks at DC Theatre Scene even wrote a review of the reading... you can read that by going HERE and scrolling about halfway down the article.
A huge thanks for everyone involved:
THE MINOTAUR
By Anna Ziegler
FEATURING Wyckham Avery, Matt Dunphy, Danny Gavigan, Marissa Molnar, Jon Reynolds, Colin Smith, Jeremy Webb
DIRECTED BY Randy Baker
PRODUCTED BY Jenny McConnell Frederick
DRAMATURGY BY Carrie Hughes
Posted by DCepticon at 1:09 PM 1 comment: