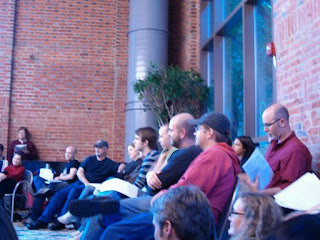 Counting down from Salem tonight I am reminded of all the ways in which Myth and story influence our lives. I don't just mean the old myths but the little myths that help us wake up and face the world.
Can anyone name me a myth besides Social Security that helps you wake up in the myth morning and go to work each morning?
Theater artists create a series of myths that help us keep doing this stuff. A myth like folks actually make a living at this.
3 shows Saturday folks get your tickets now!
Posted by DCepticon at 7:24 PM 4 comments: 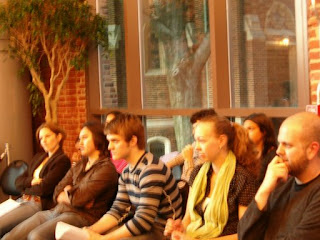 Here is the sweet thing about working with other people in a theatre company is that even when you are visiting someone in a far off land the work still gets done. And done well!
The kids were at it the other night, as the actors finally found out what the hell they are going to be doing this Saturday night. You can tell by the expressions in these photos that they are pretty much either scared or pretty much shocked! I am guessing it is a little from column A and a little from column B.
Folks this is something special and I wouldn't miss it if I were you. Last time we did this we sold out two shows and there were folks lining the aisles. There is no reason why this can not and will not happen again. Get your tickets now. Visit www.rorschachtheatre.com for all the juicy details and reserve your seats now.
A little tease there, will be some ancient Mayans who will sue us.
Posted by DCepticon at 10:03 PM No comments: 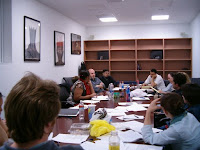 Last night playwrights, directors and producers met up at Georgetown University to workshop the the plays they wrote since they all gathered last Saturday night (below is a poorly lit picture of the folks who are working on this thing).

Tonight all of the actors and designers will join the playwrights and directors at Georgetown to have the official first read. 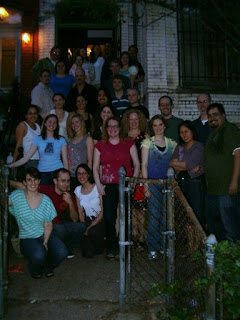 minute play in just a few short days? With a weeks worth of work they will be watching their plays live on stage.

You will all have a chance to join these folks this Saturday. Make sure you book your tickets now.

Posted by DCepticon at 7:26 AM No comments:

Saturday night was a fun gathering in the living room of Rorschach Company Member, Patrick Bussink, to kick off the second edition of Myth Appropriation.

This time our talented playwrights, actors, designers and directors will be tackeling creation myths, from across several cultures, including Japan, the Mayans and some surprises along the way.

There were beverages served and tiny cupcakes. Playwrights drew lots for their myth, then drew their director and then directors drew for designers and then actors were picked. Now the playwrights have until tonight to write a ten minute play for their casts and all these plays will be performed next Saturday Night at the Warehouse Theatre. If you want tickets visit HERE.

PRODUCED BY Randy Baker and Jenny McConnell Frederick
Posted by DCepticon at 7:01 AM No comments:

So sorry for not being in the kind of constant contact I usually am with you faithful readers.

Just to tell you some quick and dirty news, the benefit was a great success. Money is still being counted but around 100 people enjoyed an evening of dancing and drinking with Rorschach on Saturday night. Thanks to everyone who made it possible, including Maggie, Deb, Scott Chew, Grady, Randy, Jenny, Patrick, Matt, Melissa, Lauren, Ronnie and Melanie.

We will have photos for you very soon.
Posted by DCepticon at 6:42 AM No comments:

Just 5 short days and it will be time to don your mask and best black and white outfit and head to the Woolly Mammoth Lobby.

What are you folks planning on wearing?

And tickets are still available visit www.rorschachtheatre.com for details.
Posted by DCepticon at 7:51 AM 2 comments:

I spent the last two evenings with Grady Weatherford. Grady is in the process of documenting on video the first 9 years of Rorschach. I know only 8 seasons yet 9 years of history, what happened? Well a lot of stuff.

Grady has been working with Company Members and our Artistic Directors to create a special Behind the Curtain style documentary showing the steps and missteps that have created one of Washington's most in your face theater companies.

This Special Film will have its premiere at the Rorschach Benefit, May 10th, just in case you needed another reason to come besides the drinking, dancing and fancy masks.

I will have other things to tell you about the event in the coming days, but here are some teases for the video:

Which Rorschach Company have had more than just their roles padded?

What was literally and figuratively Rorschach's hottest show?

Where did the company come from any way?

And whose favorite show was A Clearing in the Woods?

I promise all of these answers and more will shock and amuse you!

Click here for more details about the Rorschach Masquerade Benefit.
Posted by DCepticon at 6:09 AM No comments: