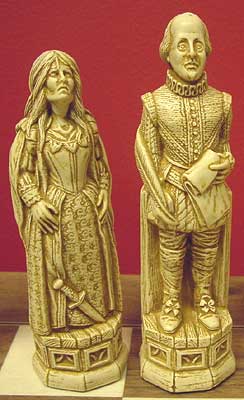 I will admit that when actors get together to do anything but rehearse or perform it is usually a series of carefully played games of one-ups-manship. Constantly trying bits on one another, speaking in funny voices, people in refrigerator boxes using toy plastic swords to beat the tar out of one another, all in an attempt to gain some sort of advantage over one's friends.

When we got together last night for the line through two men met on the field of black and white battle. Austin and Eric have been playing chess throughout the run of the show. As soon as they saw one another last night, Austin whips out his little travel chess set and begins to school Eric. I believe Austin has made up rules. I have no proof of this but there was one point where I swear I saw Eric take off his shoe and hold it next to his ear and mouth the name "Bobby Fischer" and spit.

Anyway all chess aside, I think that we are all set for the first show back tonight. I know I was champing at the bit to put my fuzzy dress back on and the rest of the cast and crew all seemed to have that lean and hungry look about them.

Just to remind you, we run now until December 10th with shows Thursday, Friday and Saturday at 8pm. If you have come already, please come again, its funnier the fourth time. If you know someone who hasn't come, send them on down and tell them that if they come to the theater show night and say "Bloggity, Blog, Blog, Blog" they get $3 off their regular admission price. Other wise for tickets visit Box Office Tickets or call 1-800-494-TIXS.
Posted by DCepticon at 6:38 AM

By my count, I'm at least 0-7 with Austin. I'm not sure why I even bother anymore. It's not great for my self-esteem to have Austin say "Check" after four minutes of play. It's even worse when he realizes a mistake he's made and adds, "Oops, I'm sorry. Actually it's checkmate."

It's kind of him to try to hold in his laughter. Sort of.

I don't have anything to say, I just wanted to up the comment count.

I don't have anything to say, I just wanted to up the comment count.

Maybe that "lean and hungry look" is due to the lack of a day job on some of our parts.

I want to thank Gwen for getting into the spirit by spiking the comment count. Ellen, sorry about the lack of a day job, have you considered the fast paced world of dog walking? And Eric, it's just kind of sad isn't it really?

Nah, I was thinking more of becoming a "dancer".

You might also consider playing chess against Eric for money. Sounds lucrative.