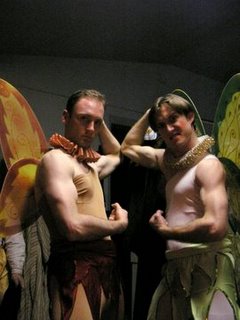 You were nervous about putting up a blurry tiny picture of me and Ellen in miniskirts, but you'll put high-resolution thinly veiled homoerotic pictures of unitard-clad men up in the middle of the day??

I'm impressed actually, I didn't know our boys were packin so much heat

I was nervous about posting the hot chick pic because I am that certain type of hetero male who was taught to treat women as objects only in the privacy of my own space, not in public. Men are and should be treated as object when ever possible.

Ok whatever,
thanks for the equality and modern hetero-sensitivity and everything,
but it's FUN to be objectified every once in a while!
as you say, men should be treated as an object 'whenever possible'

does it have to be all or nothing for women? cripes.
A little 'permission-granted' objectification is not going to return us to the days of being baby-making vote-less second class citizens.

-gwen 'I like to open a big box of debate' grastorf

Here is why I was a little leary of posting the pics of the women.

Some random guy leaves an anonymous request for pictures of some attractive women on a blog. It was the anonymous nature of the request that disturbs me more than anything.

There are people male and female who show up to the theater to follow certain people's careers. And when I say follow I kind of mean stalk. So if you and Ellen had come to me and said, we want you to take a sexy picture of us for the blog, I would have been like, yeah that's hot let's do it.

Instead it was posted in response to random guy on the web #5.

I am willing to allow anyone the opportunity to objectify themselves but damn if I am going to pimp anyone out.

hahahha oh scott,
thank you for your protection,
you really are the warden of a bunch of vixens :)

I think anonymous is someone in the cast, is the only reason why i am not leary.
"leary"
what does that word come from?? is it leery? I leer? I lear? i find it learous?

this is what i get for moving away