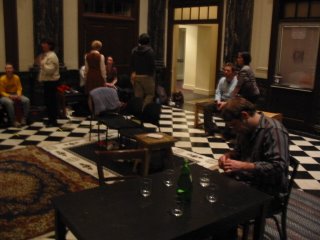 Well true believers, Rorschach returned to its Jewish roots on Friday evening, by providing a special run-through of A Bright Room Called Day to some University of Michigan students who are doing a semester in DC. Theater J Artistic Director Ari Roth is giving these bright eyed poli-sci and econ majors a down and dirty look at the theater of politics and conversely the politics of theater. Rahaleh and her happy band of actors and support staff made their way over to the 16th Street Lobby of the JCC to run, what is becoming clear to me is going to be one of our most emotional and timely shows to date.

As many of our long time fans know Rorschach has a long and fabled relationship with the Washington Jewish Community Center at 16th and Q, NW. Our first show The Hairy Ape was 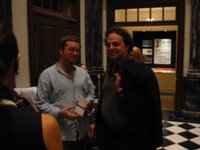 performed on their stage and our third show God of Vengeance was performed in their lobby. A lobby whose high ceilings and proximity to 16th Street and its constant bus and emergency vehicle traffic make an actors job especially challenging. Some words of greeting from Ari and our own Randy Baker and Rahaleh Nassri, the show began.

I could tell you all how well the show ran but I think you all have a pretty good sense of how I feel about this particular company and I may at times practice the art of hyperbola in a effusive, bordering on the ridiculous, manner. But it is good ladies and gentlemen, it is good. Once this show has all of its elements set it will be something that every person of conscious will want to see. And with added bonus of the lightening, thunder and gale force winds outside their was mood folks. Lots and lots of mood. 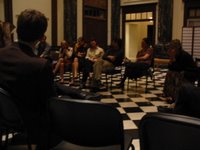 The acting is superb and the direction is firm and clear. Now we just have to dress this lady up and take her to town for an evening or twenty. After the run, the students and actors sat down for a heart to heart about the show. I love student out reach and this year we have done a fairly good amount of it. Issues of the role of a play that was written 20 years ago for our own time and very intelligent point flew around and many of them landed in unexpected and amazing ways. The students had read the play and their comment was they were amazed at how certain scenes came alive on stage and what seemed fantastic on the page seemed perfectly natural and right when staged.

This week the hard stuff starts as the cast, director, designers and crew work to make this thing a piece of art. We are so close I can taste it people.
Posted by DCepticon at 7:23 AM

I take that as a thinly weiled reference to the U of M kids and not the 1980s anti-communist film Red Dawn staring a Sheen and a Swayze.

Yes, yes it was. I am the last person to make obscure movie references. I'm just not cool like that. I did, however, have season passes to the UMich football games for the two years I was there. I think I actually attended three of them. Ari never remembers me.

My college mascot was a Sea Hawk. Funny story the college just bought a new mascot uniform and I volunteered to take it on a road trip to Goucher for a Women's Volley Ball game. I bribe a friend with some vodka and a promise that the girls were going to love it.

He gets in the suit half sloshed and we enter the gym. Goucher not to be out done on their home turf brings out somebody in a gopher costume. The Sea Hawk and the gopher start to scuffel.

I don't remember any peeing.