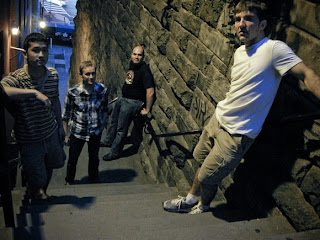 MYTH IS BACK! Our extreme new play development event returns for two rounds, performing on August 9 and August 16. You can get your tickets now by clicking here.

Our first meeting was last night and the playwrights spent last night writing drafts of their plays. The themes for this first round are myths based on themes of the season, so you will see stories based on The Arabian Nights, Ulysses, Zombies and as you will see with today's entry, TALES OF POSSESSION...

We'll be hearing from guest bloggers all this week and next week as the process proceeds. We'll also keep you up to date with the happenings of LIVING DEAD IN DENMARK and DEAD CITY, both of which are in full swing. It's a busy time for the Rorschach Blog... you don't want to miss a minute of it.

Today's entry comes from Akiva Fox, director of Colin Hovde's adaptation of the real life story behind the Exorcist (title still TBA!). Special thanks today for some awesomely creepy photos of the exorcist stairs by C. Stanley Photo.


The Power of Christ Compels you...

Hey, remember the end of The Exorcist? No? Allow me to ruin it for you: the priest dies. Actually, two priests die, but that's immaterial. The Young Priest, Father Karras, dares the devil who has possessed a girl to jump into him. Father Karras then nobly flings himself out of the window and down the world's steepest stairs (which are conveniently located beneath the window).

We - playwright Colin Hovde, actors Jacob Yeh, Dave Bobb, Josh Drew, and John Milosich, and me, director Akiva Fox - received the story of The Exorcist as our myth to appropriate. Because of our heartfelt concern for you, the blogged public, we knew that mere words would not be enough. No, we had to give you eye-catching imagery, the kind that sells tickets. That's right. We visited the stairs.

As you may know, writer William Peter Blatty set both his novel and the screenplay adapted from it in and around Georgetown University (his alma mater). So we left the climate-controlled confines of the university's Davis Performing Arts center to walk the three blocks to the stairs where poor Father Karras bit it. And we proceeded to take the following action shots, shocking and horrifying patrons of the Exxon station at the bottom of those stairs. 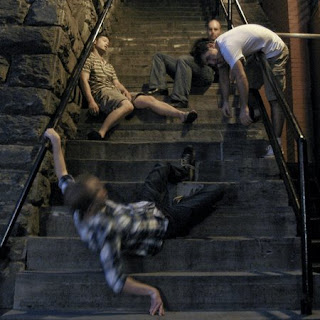 You'll be surprised to learn that this is hardly the only DC-area connection to The Exorcist. Blatty supposedly based it on the 1949 exorcism of a Cottage City, Maryland boy. Inanimate objects would jump in the boy's presence, and strange scratching noises would emanate from the walls of his room. So they called a few Catholic Priests, and they exorcised him silly. The boy lashed out with violence, cursing, and more Latin phrases than a 13-year-old Lutheran ought to know.

My two favorite facts about this legendary exorcism: one, the possession first arose after a particularly strenuous Ouija board experience with his aunt. Two, the case only came to public awareness some months later, when a minister described it to a meeting of the Society of Parapsychology at the Mount Pleasant Library. Any myth that involves board games, the DC public library system and demonic possession can't be bad.

Remember: the power of Christ compels you...to see this show!
Posted by Randy Baker at 7:48 AM