MYTHappropriationVI is here! And guest Blogger Megan Reichelt is here to tell you about our first day... Megan is one of the actors in the Divine Comedy adaptation, directed by Jenny McConnell Frederick and written by yours truly.
Sunday, August 16 the whole thing goes up with world premiere plays from Jason Grote, Sheila Callaghan and Qui Nguyen! Also featured is the afforementioned play by myself and the winner of the Audience Choice Award from Sunday's MYTHappropriation V!
So get your tickets now for MYTHappropriation: 15-minute epics! And if you haven't seen Sheila Callaghan's DEAD CITY, this weekend is YOUR LAST CHANCE. You don't want to miss this remarkable play.
I now give over the reins to Megan...
******** 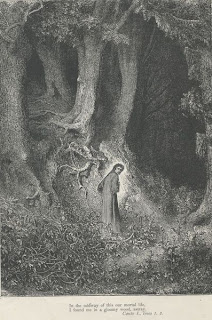 We had a fantastic first read! We gathered in the Divine Theatre, munching the theatre artist's staple foods (Cheese, Grapes, and Oreos) in the shadow of the Magic-Lantern-Like New York City set. This MythApp takes actors, directors, and WRITERS (!) from this season and shoves them off on an Epic journey through danger, hardships, and wonders to explore the mystical land of... well, Epics!

And let me tell you, each of these plays were Epic in different ways. Jason Grote's (1001) play about the Aeneid was Epic in labyrinthine oration. A feat of vocal prowess by Scott McCormick! Shiela Callaghan's (Dead City) piece was Epic in her use of the actor's talents! Every single one of the special skills they listed on their information sheets (including "creepy mask work") are used in her home version of the familial battles in the Mahabharata. Randy Baker (Artistic Director of Rorschach) shifted the camera of The Divine Comedy to focus less on Dante, and more on another, grander story of 1/3 of a canine's Epic journey to reunite lost love and un-destroy the world. Qui Nguyen (Living Dead in Denmark) 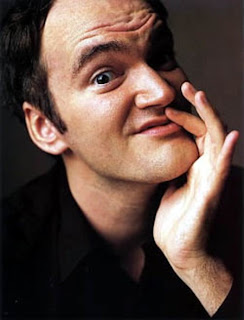 lived up to all expectations in dishing up some Epic Beowulf violence.... Tarentino Style. Finally, the winner of last week's Myth Appropriations V Audience Pick fit right at home with the rest of the Epics as Brett Abelman pieced together hundreds of stories (while incorporating every theme of this mythapp AND last mythapp AND the current season) to form his version of Sinbad's journey (and his quarrel with an old man and his fight with monkeys, and possibly his encounter with a giant egg).

We then broke off into different groups, with our provisions of cheese, grapes, and Oreos, each setting out on our own epic journeys into the particular mystery that was our play. All in all, a very exciting night, which ended appropriately and epically, with thunder and lighting.

On a personal note: I get to sing!!

Megan Reichelt
Posted by Randy Baker at 5:12 AM