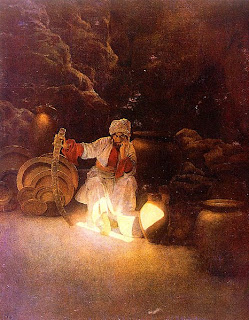 But before you do, lets check in with our last group of MYTHap-ers and hear from guest blogger Seamus Sullivan, the writer of LOVE & THEFT. With his play Seamus is bringing a little bit of Cohen Brothers to Rorschach. Ya gotta check it out. If for nothing else than to see what grisly things backyard grills can be used for...

*********
If my experience was typical, my generation's exposure to Ali Baba was filtered through Disney's Aladdin and an old episode of Wishbone and perhaps the occasional children's book. These versions of the story, intended as they are for kids, generally deliver their share of "open sesames" but skimp on the greed, vendettas and cold-blooded mass slaughter that keep the original tale spookily relevant.


Here's a short refresher: Ali Baba, kicked out of the family business by his grasping brother Kassim, is out foraging when he spies the eponymous 40 thieves concealing treasure in their secret cave using the magic words "open sesame". After they leave, he enters the cave, appropriates some treasure, and skeddadles. Eventually he spills the secret of the cave to Kassim, who greedily dashes to the cave and fills his pockets, but forgets the magic words and is trapped inside.
Here's where things get interesting. The thieves return, cut Kassim to pieces and nail them above the cave entrance as a warning. When Ali Baba takes the pieces down to give them a proper burial, the thieves realize that he too knows about the cave and must be silenced. The thieves, who are pretty inept at killing anybody unless he's a nitwit who can't remember two words and basically turns up in their living room, try to follow Ali Baba home and slaughter his household through increasingly elaborate means, finally disguising themselves as an oil merchant's wares and smuggling themselves into his home in barrels. This prompts Morgiana, a clever slave girl in Ali Baba's household, to straight up murder the forty thieves by pouring boiling oil into their barrels.
What is it about Ali Baba that prompts Morgiana to roll up and commit mass murder on his behalf? How far would each of us go to defend our home from invaders? This was the kind of thing director Karl Miller and I set out to explore with my take on the Ali Baba story, Love and Theft. We may not have been able to answer all the above questions completely, but I think we can offer you what few other plays in the DC metro area will: a glorious barbeque fight.
Posted by Randy Baker at 9:39 AM

there is a mythological thread in my culture of the simple farmer's boy tricking the devil. For a thousand years the myth has been recast in the light of lutheran missionaries and what the original message was is unclear. I would guess that we equate personifications of evil with stupidity and that innocence and on-your-feet thinking will overcome every time. Like this blog.