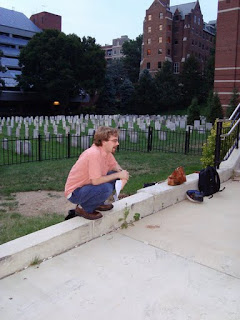 Last night the rehearsals began and today we have pictures from every corner of the city as our intrepid actors rehearsed in nooks and crannies throughout. How Emily Levin got to all these rehearsals to take pictures will remain a mystery...


Later today we will be hearing from guest blogger Leah Hamos, director THE OLD MAN OF THE SEA OF STORIES, Brett Abelman's adaptation of Sinbad's 5th journey. But for now, enjoy the pictures! 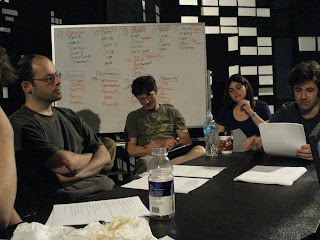 ABOVE: Actors get all serious and stuff during the workshop on Tuesday night. Note the white board in the background with all the groups chosen a mere 24 hours before. 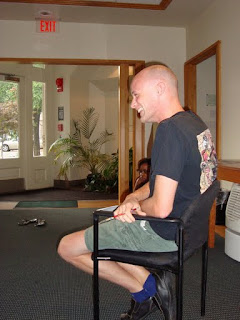 LEFT: Actors rehearse for NARCISSE by John Newman, taking place in an office in Capitol Hill 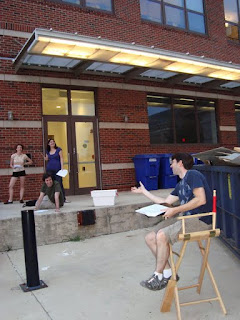 RIGHT: Karl Miller directs rehearsal for LOVE AND THEFT by Seamus Sullivan. In addition to the detail of directing from an ACTUAL DIRECTING CHAIR, you will note the location is a a loading dock. Rorschach Theatre has a long proud tradition of rehearsing in loading docks. Near dumpsters. 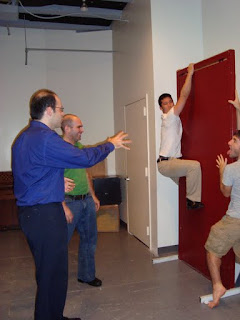 LEFT: The cast of PARALYSIS by Colin Hovde. You will notice a running theme of monkeys and other anthropomorphic fun throughout our journey... 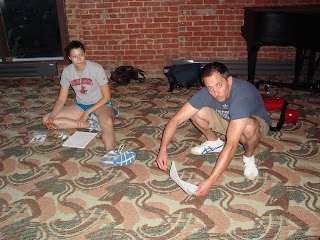 ABOVE: More of the previously-mentioned monkeys. This time in rehearsal for THE OLD MAN AND THE SEA OF STORIES by Brett Abelman. 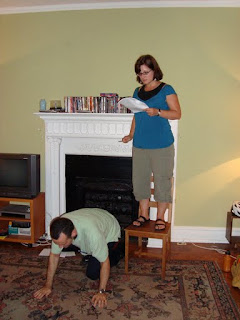 RIGHT: And some anthroporphic pigs. Rehearsing in a Woodley Park living room for SAILORS, SORCERY AND SOCCER MOMS by Stephen Spotswood.
Tickets are still available for MYTH-APPROPRIATION: Tales from the edge of the world. Get them now by calling 1-800-494-TIXS or get them online by clicking HERE.
Posted by Randy Baker at 7:07 AM