As promised, a posting from guest blogger Leah Hamos, director of Brett Abelman's THE OLD MAN OF THE SEA OF STORIES...

And don't forget! The weekend begins tonight! DEAD CITY and LIVING DEAD IN DENMARK are playing tonight, Friday, Saturday and Sunday. If you haven't seen these remarkable shows you don't want to miss the chance. In fact, if you come to one of the matinees on Sunday you can see one of the shows AND MYTHappropriationV all in one day! 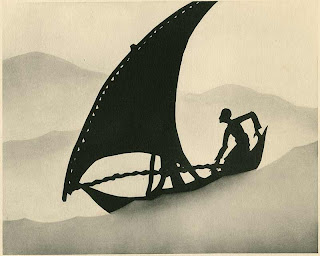 Hi again to everyone investigating the inner world of MythAppropriations V! Today, we’re tackling the story of the Fifth Voyage of Sinbad which involves all sorts of weird things such as the Old Man of the Sea, a humongous egg and a city of man-eating monkeys. So you might ask how we could pull them all together into an adaptation of such a crazy myth! Well that’s been a struggle for our playwright, Brett Abelman this week. Brett was particularly drawn to the image of the Old Man of the Sea who entangles himself with Sinbad, unwilling to let go and leave Sinbad alone.

For Brett, this image inspired a connection to a father/son relationship as they wear each other down throughout their lives. Sounds a bit depressing but it, in fact, seemed a bit familiar – and therefore tremendously funny! – to everyone in our first read on Tuesday night. The father spins wild tales calling upon our story’s Arabian Nights and Scheherazade origins to inspire him with a multitude of narrators, characters and far-off places. I worry that if I continue, I will give away too much about our story and the many fun ways it will twist and turn. 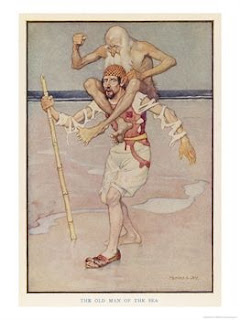 earsing and actually trying to direct the piece. Brett brought a final script to the table at tonight’s rehearsal. As a group we started to piece apart the many characters that Brett has three out of four of our actors playing (Al as the father will remain the same throughout) and build a longer arc and understanding of the piece as a whole. We read the play and timed it, looking for cuts. Read the play, timed it, and discussed. As our understanding of the piece grew, we decided to take a stab at putting the play on its feet and I think we were all incredibly surprised at how different – and alive! – the piece felt in doing so. Ian’s feel of the Son character was greater as he dealt with the weight of his father’s presence (like Sinbad with the Old Man). The interplay of the monkeys – you knew they would come back to haunt you! – felt fun but also so tangible and real, with a story of their own. Absurd, right? Well we’ve included a few snapshots of some rehearsals – we’re not sure they tell a story in 2D, but hopefully we’ve excited you just a bit!

We’re eager to get on the LIVING DEAD IN DENMARK set – all those levels to play with! – and really explore over the weekend. Should provide for some interesting playing space…

I’ll leave you with a Sinbad joke.

What did Sindbad eat when he was washed up on a desert island?

He ate all the sand which is there. (Sandwiches!)

See you all on Sunday! Leah
Posted by Randy Baker at 9:06 AM

When we talk about brave characters that venture into a dangerous voyage, well we can mention a few ones but Simbad is the best of all of them.