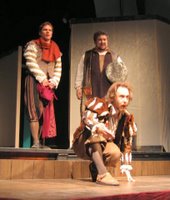 We are creeping up on our announcement of Season Seven for Rorschach. Before we hit you all with the big news I thought it might be nice to take a look back at one of our most successful seasons to date. Over the next couple of days we will take a look back at Season Six and why it was so damn good!

Season 6 began with what is in fact Rorschach's best selling show ever. You all remember the wait lists, the sell outs and the added shows. The Beard of Avon was not just critically praised and well received by audiences it was also a hell of a good time. All of the actors and designers were happy to be involved in a show that was a sweet Valentine to the playwright who brought many of us to the theater in the first place. This highly intelligent comedy asked the question many scholars on both sides of the Shakespeare Authorship debate, never seem to ask, which is more important who wrote the plays or that the plays were written? I don't know if Beard of Avon answered that question, but 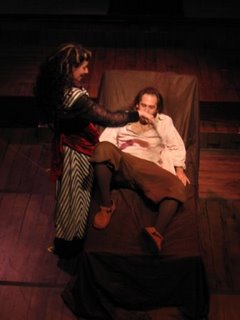 it made many people who probably never even thought about who wrote the plays ask that question and come up with their own answer.

I think that it was the show that best showed what we as a company are capable of with all of us pitching in and creating a world that transports and fulfills peoples ideas about the theater and their ideas about what Rorschach is capable of.

Here are some highlights from the blog from the time of The Beard of Avon. Enjoy!

Another Word from the Director

The Play is a Thing


Next Fair Ladies
Posted by DCepticon at 7:45 AM

i had very nearly forgotten how foxy grady's forehead can be. mee-ow.