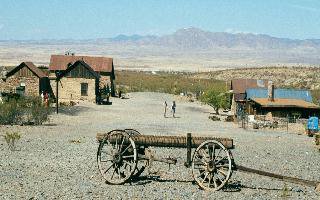 Sometimes my creativity can peter out and I am forced to use Google to create these entries. Today is one of those days. I typed the word Shakespeare and Ghost into the search engine and here is what I got, Shakespeare -- The World's Most Authentic Ghost Town.

Apparently it is just outside the city of Lordsburg, New Mexico. Interstate 10 passes through this small southwestern city. It's located in the "Bootheel" of New Mexico.

You can visit such historical sites as the Stratford Hotel where a man was killed over an egg and Billy the Kid is reported to have washed dishes. Regarding the egg incident they say they feature a re-enactment of the 1879 shooting of Ross Wood by Bean Belly Smith. Other re-enactments include the hanging of Sandy King and Russian Bill and beautiful Can Can girls greeting rowdy cowboys and miners. Be sure not to miss Death of a Government Contractor, where Bill Brocius and a Mexican Outlaw argue with a government contractor over a cattle deal. And be sure to visit Shakespeare Cemetary, you'll see the cemetary on the left side of the road as you enter Shakespeare.

Posted by DCepticon at 6:43 AM

If my name were "Bean Belly" I might be a bit trigger happy as well. Not so malicious as the boy named Sue, but most likely generally cranky.

I think Bean Belly sounds like a rather jolly moniker, actually...