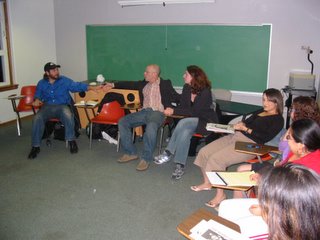 Last night members of the cast of The Beard of Avon were invited to speak to Washington Post Theatre Critic Peter Marks' theater appreciation class. That is not actually the name of the class but I am a blogger and little details like the name of the class would merely slow me down. For about an hour and a half Grady, Eric, Val and I sat and talked to the bright eyed GWU students about The Beard of Avon, our path to doing small theater in Washington and about this business we call show.

In previous semesters Mr. Marks has been able to swing the likes of James Earl Jones and Mary Zimmerman to come in and speak to the class, so four non-equity actors doing a show about Shakespeare in a church in Columbia Heights was the next logical step. Since three of us are fighting colds right now, it was the kind of discussion that only people hopped on cold meds can truly appreciate.

All of the students had seen Beard the previous week and had written assignments they were turning in critiquing the show, and there were some very insightful questions regarding audiences and performance styles. Mostly though it was an opportunity for the three boys and Val to hold forth before a captive audience and share the ups and downs that have brought us to where we are today.

Peter Marks for those of you who have wondered is actually a very personable gentleman who seems to have a great love for the theater. As he walked us out he told us a little secret. He loves coming to smaller theaters because that is where he got his start as well. He also had a great sense of humor as I reminded him of what he said regarding this actors performance in a show at Woolly Mammoth Theater earlier this year. 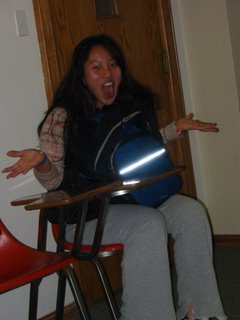 To the left is the very honest yet recreated reaction of one of the students when she walked into the room to see us sitting at the front of the class. I wasn't quick enough with the camera, so if it looks staged, that's because it is.
Posted by DCepticon at 7:08 AM

are grady and eric trying to do a reenactment from the ceiling of the sistine chapel? i think that may be extending the authorship debate too far.

I think you overstep your bounds in assuming that we were reenacting the Sistene Chapel scene, Yvette. Few people realize that the scene to which you refer actually depicts Michelangelo (in a mildly disguised self-portrait)reaching his own finger toward Adam. Michelangelo did this as a gesture of protest, because his first wish was to finger-paint the Sistene Chapel. This decision was ultimately over-ruled, and the ensuing picture has long been mis-interpreted as God giving life to Adam, instead of Michelangelo trying to finger-paint the biblical figure. As for Grady and myself, I was reaching out to him in an effort to make Val jealous, but alas, she was unmoved.

Ladies and gentleman Eric. Let's give it up to him.