A Not So Modest Proposal

First a couple of quick house keeping items and then the big news.

After another sold out weekend Rorschach Theatre will be extending The Beard of Avon for two weeks. We will be taking off Thanksgiving weekend to let people you know have a life and then we will be back for shows the following two weekends, Thursday, Friday and Saturday at 8pm. This is the first time Rorschach has extended past the end of a run, but this is not the most exciting news of the weekend.

Peter Marks has written a huge article in The Post, The Little Theater Companies That Can, about Rorschach and our allies in the world of small to mid sized theatre in the district, Theater Alliance and Catalyst Theater. Front page of the Arts Section and Huge Color Pictures. Both Randy Baker and Jenny McConnell Frederick are featured talking about all things Rorschach and the day to day struggles of being a small theater in DC. And that also is not the biggest news out of this weekend.

Where to begin? and just to repeat where to begin? There are things that happen in a theatre sometimes that have nothing to do with the show but have a lot to do with the lives of the people who put the shows on. Friday night provided just one of those events, as Co-Artistic Director Randy Baker asked his long time girlfriend Costume Designer and Rorschach Company Member Deb Sivigny to marry him. The part that makes it even more special is that the question was popped during the curtain call of that night's performance. 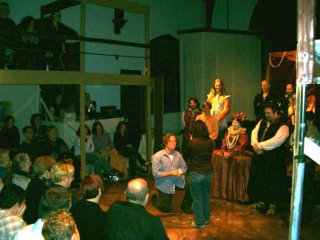 After we had taken our bows and were all standing on stage the crowd was hushed and Randy took to the stage for a special announcement. He then called Deb up to the stage and took the ring which one of the cast had cleverly hidden on his person and then Randy dropped to his knee, popped one of the hardest questions in the English Language for a man to ask. And you know what Deb said? She said yes! Otherwise it would be kind of cruel for me to be posting this on the blog wouldn't it?

Posted by DCepticon at 6:46 AM

it's a good thing i didn't say "well, i need to think about this a little..." woulda turned the occasion a little weird.
I'M SO EXCITED!!!!!!!

Congrats from DC Theatre Reviews. May the curtain call never end for the happy couple..

am i allowed to curse here? because that is more awesome than civil language can describe!