I'm Rachel Miller and You're Not! 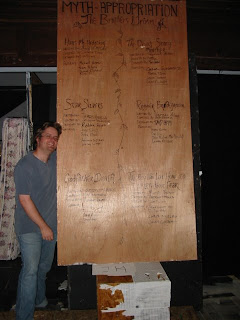 Today we continue with our series of guest bloggers. This time it is dramturg Rachel Miller who gives us a play by play of the whats and the whens of this mad project called Myth-Appropriation: The Brothers Grimm. Click here for tickets to either of Saturday's performances at 8pm or 10 pm.

Quick word from me though before I give you Rachel's goodness. Went to the read through of all 6 plays last night and this stuff is good. I mean tasty-tasty good. Each of the playwrights has found a way of bringing their stories into the present and leaving the morals and ideas of the stories intact, while bringing their own voices to the pieces. I will have more to say about this tomorrow plus a couple of teases, but for now here is what Rachel saw and did on Day 2:

As a burgeoning dramaturg and proverbial “friend of the Rorschach” I was kindly invited to serve a dramaturgical role in this, the very first MYTH-Appropriation project. Since the agenda for today was to read and workshop each new play, I obligingly volunteered to recount Day 2 of MYTH- Appropriation for all of you out in the Rorschach Blog-o-sphere!

So today we had the opportunity to hear six new plays that were less than a day old. The challenge to our writers was to adapt a randomly selected tale by the Grimm Brothers into an 8 to 15 minute play– in less than 24 hours. What ensued today was (I guess you could say) “speed dramaturgy.” In the same manner in which the playwrights had less than twenty-four hours to write their plays, today we had less than six hours to read and provide constructive feedback to the playwrights. 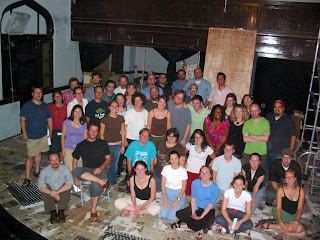 As facilitator of the discussion, I felt most fortunate to be able to explore with and learn from such marvelous playwrights as Norman Allen, Anne M. McCaw, Randy Baker, Jacqueline E. Lawton, James Hesla and Gwyidion Suilebhan, each one whose piece touched upon or invoked a vibrant familiarity with some form or subset of Americana. Across the spectrum of these adaptations, we, witnessed contemporary folk-life where it exists in a gay-run bridal shop to a small town in the middle of Nowhere; a hospital room to a vaudevillian stage; a trailer park in Washington State to the war-torn Middle East.

I like to think that the work we explored today and the work that will be developed this week is a continuation of an oral tradition which has gone on—and will continue—for thousands of years. Beyond adaptation, each play is essentially its own fairy tale—using the familiar motifs and character archetypes that we know and recognize—but also making something entirely new from them. Much like the tradition of the “wonder tales” that inspired the Grimm Brothers, each story teller makes his or her version a little different; if not to reflect certain morals and values of a greater community, then even simply for the pure artistry pours out along the way.
Posted by DCepticon at 6:38 AM