Fantastic Preview last night. We had over half the house filled. Not bad for a Wednesday Night Preview. I know it will only get better. Remember that we have two more Pay-What-You-Can Previews, Tonight and Tomorrow at 8pm. The audience seemed more than entertained and I think the cast is finding moments of laughter and tears that we didn't even know existed in References. . .

Yet this morning I heard some very bad and sad news. I don't speak for all of Rorschach when I say this but someone who I think viewed the world in a 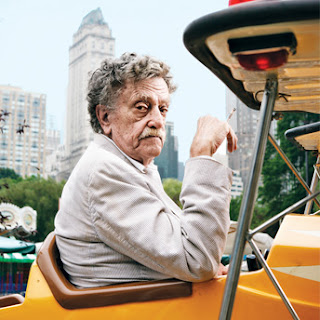 similar way that we do passed away yesterday, Kurt Vonnegut.

When I got out of college I took a substitute teaching job at my old high school. Right next to the school was the public library. Once a week I would wander over to the library during my lunch break and check out two books. The closest shelf to the entrance to the library was the Fiction Shelf V. Vonnegut was right at eye level, so my discovery of him was as much an act of laziness as it was intellectual curiosity.

I had never read Vonnegut when I was in school and decided that I should at least try reading Slaughter House Five. This book opened my eyes to the potentials of story-telling. As the story moved back and forth along the continuum of one man's life, as extra-terrestrials and the fire bombing of Dressden began to fill my minds eye, I began to realize that Science Fiction and Literature were not mutually exclusive. That social commentary and deal with your own demons were not something that needed to be seperated but all of it spoke to univeral truths that exist within all of us.

I couldn't get enough. Next came Breakfast of Champions, Player Piano, Cat's Cradle and Slapstick. By the end of the year I had read all of his books and all of the short stories. My mind was filled with images of super evolved humans who had survived the end of the world, former American Spies who were exciles in their own country, and Ice 9. I had found a writer whose liberal leanings and moral view of the world echoed my own. I had found my literary hero.

When I found my home, here at Rorschach, the thing that inspired me most about the work we do is the very real and solid connection to the work of Vonnegut that exists in much of our work. Our willingness to produce writers who don't play by the strictest of narritive rules. Writers who play fast and loose with the continuum of time and space (Come and see References . . . and you'll see what I mean). Who are willing to break your heart and make you laugh at the same time.

Posted by DCepticon at 7:21 AM

I am humbled to admit I have never read any Vonnegut. Yet I have had a favorite Vonnegut quote since someone posted it on the door of their dorm room in college.

“Hello, babies. Welcome to earth. It’s hot in the summer and cold in the winter. It’s round and wet and crowded. At the outside, babies, you have about a hundred years here. There’s only one rule that I know of–

"I am humbled to admit I have never read any Vonnegut."

That there are things of surpassing beauty in this world that you've yet to experience is nothing to be ashamed of.

If I might suggest that you start with the obvious and discover all of rest. Slaughter House 5 will be the classic, but the warmness in my heart for Cat's Cradle and Mother Night will burn bright forever.

Who is more to be pitied, a writer bound and gagged by policemen or one living in perfect freedom who has nothing more to say?
-Kurt Vonnegut