Get to Know Scott McCormick 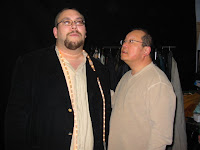 Hello! I am the one on the left. Just taking my turn in the hot seat. And also taking some time to remind you that Pay-What-You-Can Previews start tomorrow night. We battled our way through tech this weekend and we came out alive so if you want to see what some people are calling my best work standing on a refrigerator in the desert, join us for References to Salvador Dali Make Me Hot.
Now the man, the myth and the egotist. Get to Know Scott McCormick (follow the link to see a previous interview with Scott).
1. What is your job in References to Salvador Dali Make Me Hot?
I am the moon. Soy la luna. Gender issues aside. I stand way up in the air and sing to my sweet Gabriela.
2. Have you ever worked for Rorschach before and how?
Worst kept secret in DC Theater, I am dcepticon. I know there is some shock and there is some surpise from like three of you. I have acted in numerous Rorschach shows in the past. I do the marketing, which means a lot of things most of them fairly boring. I also do some modeling.
3. Do you have any recurring dreams and if so what are they about?
When I was a child I used to have this one dream that I lived on a world that was torn apart by war and violence. I was an astronaut who was sent off into deep space. When I came back the world was at peace and no one who was left remembered that I had gone away. I wander around trying to figure out why the world is so peaceful and quiet. No more war and no more violence. Well it turns out the reason there is peace is because some scientist had put a super bomb at the middle of the planet and if anyone makes a noise above a whisper the world will explode. I get briefed on this by the scientist and just as I am leaving his lab I stub my toe.
Had this dream over and over again for like three years in the '80s. Go figure
4. Other than Dali which painters turn you on?
I have to say that I am a huge fan of two Spanish painters. Goya and El Greco. 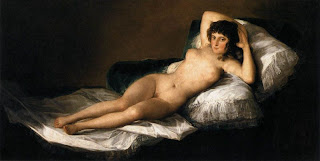 5. Have you been doing any special research for the show?
I stared into the sky a lot last week. With the full moon shining down I kept thinking what it would be like to stare down on the earth forever and not get to say your piece? I hope I give some voice to that.
6. Who is the biggest celebrity you have ever met and how?
When I was a baby my parents ran into Jesse Owens at a restraunt somewhere in the mid-west. I have met other celebrities but he is the one that I wish I could remember. There are pictures.
7. In a steel-cage-no-holds-barred-death match which character in Dali would win?
The desert is a harsh mistress. The heat, the lack of water and the deadly predators make life a challenge at every turn. Without a doubt even with Benito's excellent training he would be coyote food without water after a couple of days. And the coyote would be Benito food if he wasn't careful.
8. Who do you kiss in the show?
I kiss Gaby. As a character actor you very rarely get the opportunity to lock lips with your 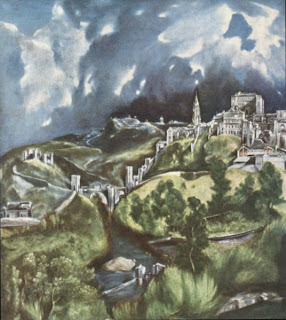 female co-stars, as a matter of fact I have only had two plays where I have kissed anyone before this one. And they were many moons ago. I would ask you to pardon the pun, but since all puns are intentional I do it without remorse or apology. And she kisses good by the way.
9. If you could live inside of any painting what would it be?
View of Toledo by El Greco. Just look at that sky! Or the one with the dogs playing poker. I love that thing!
10. If you had a theme song what would it be?

Posted by DCepticon at 6:50 AM

Labels: Get to Know, References to Salvador Dali Make Me Hot, Scott McCormick