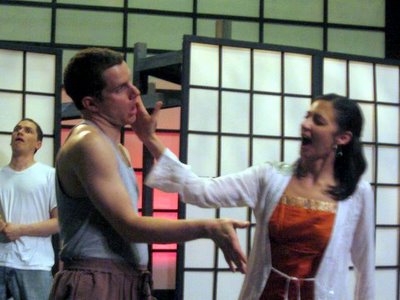 It's Photo Caption Contest Day here at the blog! Post your best caption for the above picture taken by blog special photo-correspondent Gwen and I will by you a coke. And if you are over 21 I might even put a little something in the coke. Tell me what you think is going on between Nelina and John-Michael in the above photo and if you are feeling really creative what the hell Patrick is doing in the background and you can win. Post your caption to the comments section of this post or email them to the blogger. Good luck!

Very responsive and fun crowd last night. There was one guy who was laughing at some stuff we didn't even know was funny. Remember this weekend would be a great time to catch Fair Ladies with the $10 ticket offer when you mention this post for the Friday 8pm and Saturday 5pm and 8pm shows. Keep in mind that there is always a rush the final weekend and the show has been selling out.

So in case you were planning on staying home tonight to watch the opening ceremonies of the Winter Olympics, I will save you some time. There will be no ice skating. It's like 65 degrees in Turin right now so there will be a lot of talk about there not being any snow. Then they will repeat the fact that there isn't any snow a couple of more times before they trot Luciano Pavarotti out of retirement to sing something in Italian so most of us won't even understand it. There will be absolutely no mention of the 1969 film classic The Italian Job staring Sir Michael Caine filmed in Turin (and I don't care what NBC says, it is Turin if you speak English not Torino). They will once again talk about there being no snow. And North and South Korea will put aside their differences for one night as they march into the stadium as a group, before they go back home to plot the destruction of one another.

No get on over to Rorschach before I have get all Boitano on your ass!
Posted by DCepticon at 6:49 AM

"An attempt at a high-five gone horribly, horribly wrong enrages Scottzillataka, who has just ripped one of the chandeliers from the ceiling with his massive, massive orson wellsian claws" ?

Every caption I can come up with is completely un-PC and offensive, so I will refrain.

Coming next season to Rorschach Theatre:

The heartbreaking scene from "Brokeback Samurai", in which Patrick utters the line "I wish I could quit you."

Nelina: I TOLD YOU never to touch me there!
Takeguchi: He just touched ME there and I'm still lovin' it.

Okay, I vote for that last one. You can't dispute a testimonial that includes chronological documentation and a sense of tradition.

Plus, it makes Nelina sound like a really good beer.

on what i'm actually doing in the pic:

do you have any idea how long it takes to commit seppuku with one of those bamboo swords??

i could've been in the pure land by now . . . if only i had the stick-to-it-iveness.