A very good review for the show is up at Potomac Stages web site. Here is a quote that sums up the lovin' we got from Brad:

Once the lights dim, the costumes confirm the ancient setting but the predominantly occidental cast make no effort to hide the fact that their names are Guadamuz, MacDonald, Porter and McCormick as well as Twanmo, Tuazon, Nassri and Khalsa. The performance style is both rigidly formal and freely energetic, a mix that is difficult to accomplish but which Baker's cast achieves quite well.
- Potmac Stages

Next I would like to discuss the song from the pre-show music that seems to be trapped in the heads of nearly everyone in the cast. Beck's Heaven Hammer with its sort of strange ether cords 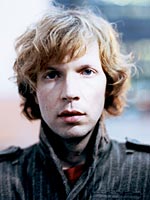 and haunting vocals has become a moment of calm before the performance.

Thank you Mr. Beck for all of your mid-80s inspired music which pulls on the strings of this young boy from Baltimore's heart strings and fills me with the images of my first slow dance in middle school with Alexi Coutrous, it was to Time After Time by Cindy Lauper. I miss you Alexi!

Enjoy the song!
Posted by DCepticon at 6:52 AM

Would it be possible to find out the song list that was used in the show? I have the song from the second fight stuck in my head and I have no idea what it is...