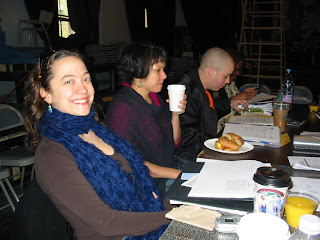 And so References to Salvador Dali Make Me Hot begins, not with a whimper but a bang.

Since the blog started we have had 6 first reads. I just missed the one for Beard of Avon, but I think all of you are all starting to get the hang of it now. I show you some pictures of people around a table and there is always some kind of food in the pictures (in this case it is a bacon, egg and cheese bagel that Yasmin brought). What more is there really to say on the subject? We sit at a table Randy and Jenny make a pitch, the director tells us what her idea of what the play is about, the designers make their pitches and then we read the play.

What I think I have tried to convey on these pages is the feeling of expectation that fills the room. The unknowable of whether this whole thing is going to work or not. I will be honest I have been in first reads that have scared the hell out of me. My confidence is knocked out of me before we even get on our feet. Knock wood that has never been the case in a Rorschach read, but even the most talented and intelligent performers and directors, sometimes find themselves stranded on a sinking ship before they have even left Pier One.

What was the mood this weekend? I have to say it was pretty damn good. In the interest of full diclosure I had some worries about the play. I think I have mentioned some of the fantastical elements of the play, the talking cat, moon and coyote. Those parts of the play struck me with their poetic beauty and vibrance the first time I read the play. It was the sticky middle that had me worried. This center and heart of the play is straight-up two people talking to one another drama, and that is not always the easiest thing in the world to do.

When you have two people alone on stage talking to one another, you need chemistry. Even 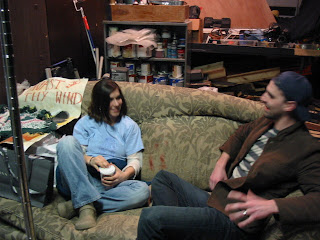 more so if the play is about two people who have been married to one another for a long time and have to make that comfort with one another seem effortless.

Now I am not making the bold assertion that Gabriella and Andrew were like a married couple from the first time they read together, but I will say that even at the table read you could feel the heat that will make this show a success. Nearly all my worries about seeing two people talking to one another melted away by the end of the read. These two have chemistry, biology and physics through the roof. And even hearing the stage directions about the steamy bits (edited by Shirley because her parents were there) made me realize how this play will live up to its title.

I'll have more to say about rehearsals as we go through this thing. I will have a lot of material to convey so check back here regularly, because when the blogger is in the show, you get more.

Posted by DCepticon at 7:18 AM

And the irony is that my parents were totally hippie parents--all like "love your special parts and call them by the right names" and there I was getting all verklempt. Silly me. It's just that, they don't need to know, like--too much, right? Anyway, yeaahhh.

But they loved it and were so excited to be "part of the early stage of the process". And as usual my father gave me "notes".