Get to Know Danny Gavigan 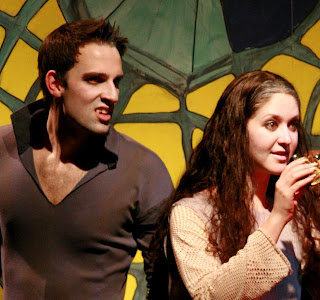 Today we present the first in our on-going series Get to Know Your Cast and Crew. This series allows you, the reader, to get to know the cast and crew of Rorschach's upcoming production of Jose Rivera's References to Salvador Dali Make Me Hot.
We begin our journey by invading the psychic landscape of one Mr. Danny Gavigan. This young man is doing the two show thing this season for Rorschach and we couldn't be more pleased to have him. So please enjoy this excurison into the Dali Zone.
1. What is your job in References to Salvador Dali Make Me Hot?
My job is "Coyote." No clue yet as to what exactly that ends up meaning, you know, if it comes with any benefits.
2. Have you ever worked for Rorschach before and how?
Yes! I was Ariel in Rough Magic. It wasn't all madlibs and man tights, it was fun.
3. Do you have any recurring dreams and if so what are they about?
I haven't been dreaming a lot lately, and it's starting to really frustrate me because I miss them. Either I haven't been dreaming or I'm just so wrapped up in day to day life, moving to the city, working on this show, the niner-to-the-fiver, that I'm losing them when I wake. But recurring dreams? Nothing really comes to mind. I usually dream about certain people in various contexts now, whereas when I was younger I distinctly remember dreaming about recurring places, like a house or a yard or a movie theatre, with very specific layouts that never existed in real life, but I'd always recognize in dreams. I also usually dream about old friends or lovers, only, in the dreams we have completely new relationships, on my terms, relationships that aren't as fucked up or nonexistent as they are in real life.

4. Other than Dali which painters turn you on?
Alex Ross. Bob Ross. --I wonder if they're related? But Bob Ross' furry fro definitely turns me on.
5. Have you been doing any special research for the show?
A lot of youtube research. Lotta backwood coyote huntin' videos. I saw an episode of The Simpsons where Homer is tripping off chili peppers and a coyote spirit visits him, voiced by the late Johnny Cash. I initially had this urge to try to incorporate as many coyote traits as I could into this character, but the more I read from Jose Rivera, the more he seems to discourage actors from doing exactly that. So I think I'm just gonna do a little bar hopping, take in some slovenly scumbag vibes.
6. Who is the biggest celebrity you have ever met and how?
I've worked with quite a few as a background artist. I'm kidding. I'm not that delusional. Quite a few have worked with me. But I guess you could say I met John Waters when I asked him to sign my copy of Cecil B. Demented after he spoke for a few hours at UMBC, which was basically some of the most hilarious stand-up I've seen about his life and his movies. Anyways we shot the shit, I thought it was time to crack a joke, told him all I could find was my copy of Cecil but if I had things my way, I'd have his Pecker in my hands. Only it didn't come out that smoothly and the awkward silence was cut by the asshole behind me in line pushing me out of the way.
7. In a steel-cage-no-holds-barred -death match which character in Dali would win?
Gabby. I would say Coyote, but the friggin Moon weakens him, it's too much of a kryptonite. Gabby all the way, she's got Benito by the balls and a .9 millimeter.
8. Who do you kiss in the show? (director and stage manager feel free to answer this as well)
Cat, played by the lovely, Yasmin Tuazon. And interestingly enough, she does smell like soap. I don't know if Yasmin likes to stay severely true to the script or if she's just a really clean gal.
9. If you could live inside of any painting what would it be? 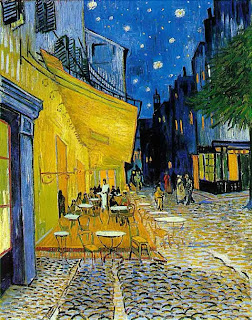 That's like indecisive person torture is what that is. I think I'd like to live inside Van Gogh's Cafe Terrace at Night, or whatever the French call it. It seems pleasant, rich with culture, relaxing, breezy. Order a drink. Watch the people walk by. Hear whatever hits the cobblestones.
10. If you had a theme song what would it be?
And for the actors what would your characters theme song be? Danny's theme song would be Daniel by Elton John. Coyote's theme song would be Wolf Like Me by TV on the Radio.
Posted by DCepticon at 6:08 AM

sorry to burst your dreambubble danny but, yes, we deam everyday. in fact, whatever we can recall amounts to about only 5% of our entire dreams.