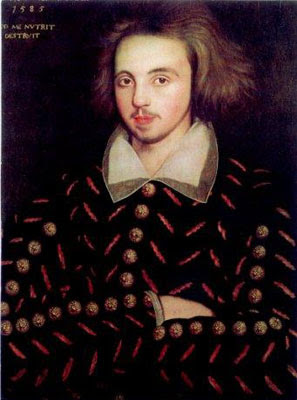 It was announced this morning that there will be a Christopher Marlowe Festival in DC next Season. And the theater's involved are The Shakespeare Theatre Company and Rorschach Theatre. Yes, we were asked special. I will have more details soon, but Jenny and Randy were at the Press Conference this morning as The Shakespeare Theatre Company announced their 2007-2008 Season.

Shakespeare Theatre will be doing two Marlowe productions to inaugurate their new space and we will be doing a project which I will have more details on shortly in our space.
This is a fantastic opportunity for the company and we are all excited to be a part of what may not be as big as The Shakespeare in Washington Festival but will be every bit as interesting and hopefully artistic.

That is the news, hope it lived up to expectations. I will have more details on the show as soon as possible.
Posted by DCepticon at 9:14 AM

Rorschach and Shakespeare? Congratulations Rorschach! But is M. Khan going through a mid-life crisis?! What an amazing collaboration of a (really f*cking good) David and (an often uppity)Goliath.

I like the idea of us using a home made sling to bring down a giant. But I think the more comparable comparison is a DC Theatre Big Brother/Big Sister program. I for one think Mr. Khan is simply seeing that there is one small company in town that has stepped up to every challenge this City has put up in the last few years; Fringe, Shakespeare in Washington Festival, and has met and exceeded expectations.

Thanks Big Bro/Sis for giving a leg up to the little Bro/Sis that could.