Get to Know Andrew Price 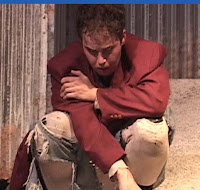 Andrew is a special kind of man and I have grown to appreciate the many and diverse ways in which he brightens the lives of those around him.

I am particularly proud of him because he provided all of his own links and actually responds to the previous Get to Know You posts of his fellow cast mates in References to Salvador Dali Make Me Hot. So without further ado, Andrew.

1. What is your job in References to Salvador Dali Make Me Hot?
i play benito. my job is to avoid making the whole middle part of the play only about shouting.
2. Have you ever worked for Rorschach before and how?
i acted in Rorschach's very first production, The Hairy Ape, in the summer of 1999. i could never get clean and left smears of black makeup on everything in my life. no one had any inklings of starting an ongoing, full-fledged theater company back then, so the parties were awesome and dangerous. i later acted in Rhinoceros in 2000 and Family Stories in 2003.
3. Do you have any recurring dreams and if so what are they about?
broken mirrors, duct tape that has lost its stickyness, alice-in-wonderland gigantism.
4. Other than Dali which painters turn you on?
i'm more of a sculpture and architecture guy. gaudi's cool and a lot like dali. he got hit by a tram and was taken to a pauper's hospital, as he could not be identified. his friends found him dying there and tried to move him to a better facility. he would not allow it, saying, "i belong here among the poor." however, i feel more deeply for joseph beuys. he lived in an art exhibit with a live coyote for three days in soho. as a statement on american capitalism, the coyote urinated, unprompted, all over copies of the wall street journal each morning. 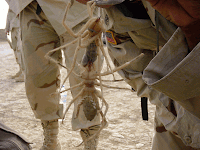 5. Have you been doing any special research for the show?

6. Who is the biggest celebrity you have ever met and how?
grady weatherford, at a reenactment of an 18th century american slave auction at the smithsonian museum. and the rest is history.
7. In a steel-cage-no-holds-barred-death match which character in Dali would win?
danny is wrong. cesar is wrong. wrong, wrong, wrong. the correct answer is benito. with all due respect to mr. gavigan -- with the stakes as high as they typically are in cage match, a determined and well-trained army combat veteran can do great damage without his testes. they really aren't mission critical. besides, the army already owns benito's balls and that arrangement has transformed him into the ready-abled soldier he's become over the years. furthermore, benito knows martial arts. finally, he can take apart an M-16 A2 and put it back together blindfolded; gabriela's .9 mm doesn't really win against a well-assembled A2, no matter the venue.
while cesar's pick of the moon at first appears both self-evident and elegant, owing to the moon's obvious advantage in size (3.793×107 km² = 0.074 Earths) and mass (7.3477×1022 kg = 0.0123 Earths), he forgets benito's open disregard for the moon. at the end of the day, benito sees the moon as nothing but a compulsive onanist with a cross-dressing fetish. as for the desert, benito has been equipped, both mentally and physically, to survive in the middle of nowhere with nothing but shoestring and a mirror. he is a master in the art of desert warfare and survival. the good money is on benito.
next question.
8. Who do you kiss in the show? (director and stage manager feel free to answer this as well)great question.
i'm glad to answer it:
gabriela. the character, not the actress. i mean, technically i kiss her too, but it's better to focus on the character.
9. If you could live inside of any painting what would it be?

i would live with the coyote, in soho, i think.
10. If you had a theme song what would it be?

And for the actors what would your characters theme song be? i do have a theme song -- "escape artist" by sage francis. benito's theme song, at least during his two scenes within this play, would be "mentirosa" by mellow man ace.
Posted by DCepticon at 6:21 AM

Labels: Andrew Price, Get to Know, References to Salvador Dali Make Me Hot