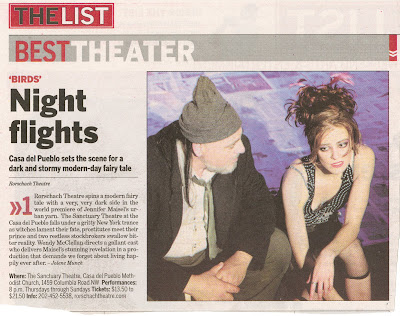 Let's try this again. Above is a bit about the birds from Jolene Munch at The Examiner. She saw the show on Saturday and in the Weekend Section of The Examiner she has made birds her #1 pick for best theater in DC. While the review is short and sweet, her final sentence sums it all up:

Wendy McClellan directs a gallant cast who deliver Maisel's stunning revelation in a production that demands we forget about living happily ever after.

There is also some nice words from our friends over at The Express (The Washington Posts free daily). Erin Trompeter writes:

Those on the aisle be warned: You may be propositioned.

Here is the link to the whole shabang but you might want to pick one up yourself.

Yesterday there was a nice piece in the Back Stage Column of the Post. Jane Horwitz spoke to both birds playwright Jennifer Maisel and director Wendy McClellan. Here is the link (be sure to scroll down past the stuff about Olney and Jimmy P.) and here is my favorite quote from Jennifer:

The Los Angeles-based Maisel, whose "The Last Seder" was produced at Theater J in 2003, says one of the themes is making connections across class chasms -- "you see the homeless person and say, 'That was someone's baby.' "

What else we got you may ask yourself?

There are two mixed reviews from Potomac Stages and the newly rechristened DC Theatre Scene.

It is Hemmingsen, however, that takes possession of the stage each time he's on it. He's a homeless man with a surplus of common sense and a touch of magic of his own. When Valentiner donates one of three of her boyfriend's overcoats to the homeless man she sees on a bench every day, he begins a transformation into a sartorially splendid, suave man about town. Through it all, he remains fascinating to watch. -Brad Hathway- Potomac Stages

Enter a menacing but friendly ogre, in the form of a homeless man, Gus, (Brian Hemmingsen). Along with the prostitute, A, (Marissa Molnar), who hustles a stranger in the audience, these two street characters seem to have a better grip on the real world than do our hero and heroine, living in a high-rise dream. Maybe all four characters are one and the same? Jorie tells us she feels dislocated and bought, just as A does. James is jobless; Gus is homeless. Aware of their sameness, Jorie and James throw a cocktail party, invite and share their lives with A and Gus, who allows his hair to be cut and dresses up in a business suit. In the play’s best moments, the four characters swap roles and interact as if they accept their oneness as a family and the city as home. - Rosalind Lacy - DC Theatre Scene

I will continue to bring you the words of the critics and Rorschach fans alike here on the blog.
Do you agree with the reviews or do you have an opinion of your own. Tell me what you think about birds. Email me here and we can talk.

Sincerely,
Scott "The Mad Blogger What Blogs at Midnight" McCormick
Posted by DCepticon at 6:20 AM