Yes, ladies/gentlemen it is Election Day! And while Rorschach cannot endorse any actual poltical candidates, I would like all of you to think how a company that produces shows like A Bright Room Called Day, Accidental Death of an Anarchist and Family Stories: A Slap Stick Tragedy might vote. Then I want you to look deep into your soul and remember how much Rorschach's shows mean to you. Then I want you to vote. I am not saying who you should or should not vote for, but I think if you look deep down in the bottom of your theater going heart, the answer will present itself. 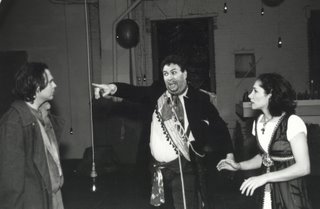 All right I will come out and say it! Its time to write-in Grady Weatherford for Senate in Maryland and Rahaleh Nassri for Senate in Virginia. They both meet all of the qualifications to be Senators: American Citizens and over 30. Either one would be willing to spend tax payers money on frivilous things like education, healthcare and the arts. And most of the incriminating photos of Grady and Rahaleh are the property of Rorschach Theatre. Here is a photo of them in an early political debate on the issue of Stem Cell Research.

I won't tell you it doesn't matter who you vote for but just go out there and vote, because that is rather a silly thing to say. Vote the way you heart tells you, and then ask your head who it likes and then let your kidneys break the tie.

And get your tickets for Monster.
Posted by DCepticon at 6:53 AM

Thanks to all of those who worked tirelessly to put me over the top in Maryland. We have come so far, but just not far enough. I just got off the phone with Ben Cardin...no,no, come on, he ran a great race and he deserves our respect...so lets all rally behind our next US Senator. Again, thank you all for your support and God Bless the United States of America.

actually, this is a photo of the two candidates trying to sort out the baffling number of rules the moderator is so passionately laying out. the debate really began 97 minutes later, after the audience was allowed a break to tinkle.