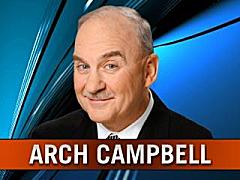 Local folk legend and Shear Madness "Fanatic", Arch Campbell is leaving local television. After over 30 years at WRC (Channel 4 NBC) the Washington Post is reporting that Arch is being axed. This comes after the demise of such main stays at WRC as George Michael, Susan Kidd and I.J. Hudson.

Mr. Campbell will long be remembered for making one of the most damning statements in local theater history:

Arch Campbell - WRC-TV: "The most fun I ever had at the Kennedy Center"

This is of course in reference to the long running Shear Madness where locals dump their out of town guests for a night of non-threatening theater. Now I have nothing against Shear Madness, but there have been a lot of shows come through the Kennedy Center over the years, and to make such a sweeping statement about what amounts to an evening of gay hair dresser jokes and pick-your-own-ending comedy, one has to ask, what the hell?

Perhaps it would not rattle my cage that an arts and movie critic made that pronouncement, if when I moved to DC it hadn't been plastered on the side of every Metro Bus and cab in the City.

Mr. Campbell you and your jaunty hat will be missed on the red carpets of whatever movie is opening at the Uptown. Your NBC peacock microphone will be absent at each Kennedy Center honors and Mark Twain Comedy Award night. I hope you have plenty of time to see even more theater in town, something besides the longest running show in the Kennedy Center's history.

Posted by DCepticon at 7:07 AM