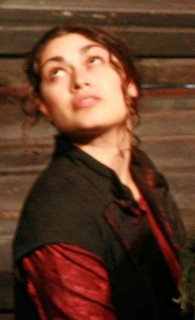 Once again ladies and gentlemen a Final Weekend LOOMS, with a capital OOMS. MONSTER must close this weekend and what better way to say goodbye to a very talented cast then by seeing the show this weekend.

I know many of you have already hit the road for either Jersey or Upstate New York, because that seems where everyone heads during the holidays even if they aren't from there. But for those of you who remain, I know most of you have probably already seen the show, so thanks. But wat have you done for us lately? Consider my suggestion of sending your out of town relatives to see a show this weekend.

After the football games are over and the turkey is eaten, why not shoo them out the door Friday at 8pm, Saturday afternoon at 4pm or Saturday evening at 8pm to catch MONSTER. And don't forget that November Sweeps are over so, Desperate House Wives is a repeat on Sunday evening, come on by Casa and see the final performance at 7pm.

Before you all leave for the weekend why not check out the answers provided by Ms. Lily Balsen. Lily is what is becoming and endangered species in this town, a recent graduate of Middlebury College. She is that lady on your right. She adds the lady in peril factor to our tale of Gothic Horror. So with out further ado, Lily!

1. Where are you from, originally?

2. Where did you go to school?

3. What is the last book you read for fun?

Written On The Body, by Jeanette Winterson

4. When you first learned that you would be working on MONSTER, what was the first thought that crossed your mind?

5. If you could reanimate anyone, who would it be and why?

One of my Grandfathers—what could be more remarkable than discovering where you came from?

6. As a kid, what was your favorite Halloween candy?

My brothers and I bartered for each other's candy after a night spent greedily taking treats from strangers. Reeses Peanut Butter Cups (the large ones) were always most coveted.

8. What story of primal horror would you like to see Rorschach stage next year?

A musical rendition of Monster.

9. What are your words to live by?

Mr. Jason Linkins, you will never hear my pun!

11. What's something you do in every show to maximize the audience's fear?

12. Why did Victor give the Creature a [REDACTED]?

It's the [redacted] that makes the man.

Posted by DCepticon at 7:04 AM