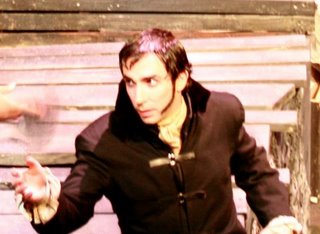 Five count them five chances to see the show this weekend. Thursday, Friday and Saturday at 8pm, Saturday at 4pm and Sunday at 7pm. The show is a brisk 90 minutes (I read that somewhere) so you can always plan on making other plans after the show.

Jeremy Goren is our own Dr. F in this here production of MONSTER. And I will say this for him, he is more than just side burns and a black coat.

Before we get to Jeremy's answers I just want to take this opportunity to thank the good people at Benny's House of Hair Wax for their sponsorship. When your hair needs a good wax there is only one house of wax, Benny's House of Hair Wax. Take Interstate 95 to the Slawson Cut-off, get out cut off your Slawson and proceed 5 more miles to the fork in the road where you will see a sign for Benny's House of Hair Wax. Now stay tuned for Ron Howard, Ron Pearlman, Rhea Pearlman and Jo-Jo the Wonder Horse in Attack of the the 50 Foot Giant Thing With Tenatcles.

1. Where are you from, originally?

2. Where did you go to school?

3. What is the last book you read for fun?

The Rum Diary, by Hunter S. Thompson and Souls on Fire, by Elie Wiesel

4. When you first learned that you would be working on MONSTER, what was the first thought that crossed your mind?

Something is happening here, but I don't know what it is.

5. If you could reanimate anyone, who would it be and why?

Pac. He wasn't finished with us.

6. As a kid, what was your favorite Halloween candy?

"The Crystalline, Radiant Sky", by The Cynical Idealist

8. What story of primal horror would you like to see Rorschach stage next year?

9. What are your words to live by?

"Arm yourselves with your array: Design, Wisdom, Intellect, Knowledge, and Vision, the power of Hands and Feet."

There were only seven of them, and it was Havana, not Cancun.

11. What's something you do in every show to maximize the audience's fear?

I play with menstrual blood. And I eat it.

12. Why DID Victor give the Creature a [REDACTED]?

A wise man, on the edge of the wilderness of infinity, once told his disciples: "As for the whole gang-bang scenario, well, it just couldn't happen. Smurfs are asexual. They don't even have...reproductive organs under those tiny, white pants. That's what's so illogical about being a Smurf. You know? I mean, what's the point ofliving... if you don't have a redacted?"

Posted by DCepticon at 7:12 AM