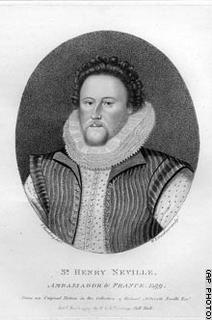 Eric Singdahlsen, let me know that CNN is running an article on the newest suspect in the Who was Shakespeare? Debate.

The newest suspect is Sir Henry Neville, an English courtier and distant relative of the Stratford Shakespeare. Shakespeare himself was simply a front man, claim Brenda James and William Rubinstein in "The Truth Will Out: Unmasking the Real Shakespeare." The book was recently published in Great Britain.

Once again the debate will rage over whether a man with little education and from a lower class background would have been capable of writing the works of Shakespeare.

Sir Henry joins the ever growing list of suspects who we have mentioned before; Edward deVere, Sir Francis Bacon and Christopher Marlowe.

I was wondering if we have anyone who would like to weigh in on this great debate. I will admit that I am in my heart a man who believes that one man wrote the works of William Shakespeare and that one man is William Shakespeare. I think it ma ybe something strangely American in my make-up that offends me when yet another member of the British Ruling Class is trotted out, rather than facing the very real possibilty that Shakespeare was a genuis who just happened to have been born to the lower classes.

Please chime in with your thought.
Posted by DCepticon at 11:01 AM

I think that this whole debate is symptomatic of a society obsessed with the Cult of Personality. Why is the person more important than his/her legacy? In a society where a President can be impeached for sexual impropriety but NOT for starting an unjust war, our culture's myopia about personality versus action strikes me as unbalanced and insidious.

I find it odd that one of the main arguments against the country fellow known as William Shakespeare is: how can a country mouse know so much about the city and court life as depicted in his works? Have these people not heard about that little spark known as IMAGINATION? It's like saying that the LORD OF THE RINGS had to be written by an Elf from Middle Earth because how could Tolkien know so much about that place and its history? Or arguing that Dostoyevsky must have murdered someone in order to write CRIME AND PUNISHMENT.

Additionally, there is a transparent classism endemic in the Anti-Stratfordian camp that I find absolutely repulsive.

To me, it's like Edward De Vere, the Earl of Oxford says in Act Two of Freed's play: "What does it matter who wrote them--they're out there--for all time. Someone wrote them. Thee, me, we, whoever. 'Tis all one. It's really about the work. Don't you think?"

Much of evidence for the Oxfordian argument is just as tenuous as the evedience for the Stratfordian point of view. I think it is less emblimatic of the Cult of Personality than it is for there to be a person who represents a thing which is transcendant.

One of the things I think this play goes along way to doing is demystifying Shakespeare. He ate, he slept and he loved like any of us. And if it is one man or dozen different people all of it boils down to the simple fact there is human experience in the plays and poems. These were not written by a god or an extraterrestrial but by a human being.