Get to Know Nick Stevens 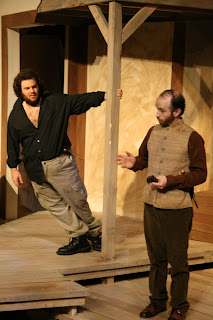 Nick Stevens is new to our little gaggle. I have to say he does an excellent job of both being a drunk french monk and a scummy murderer. What more could you want in an actor?

He is the one in the left of the photo, with the hair on his head.

Now Get to Know Nick Stevens.

1. What is your position, role or roles in Kit Marlowe?

I'm a liar, a cheat and a thief. And I play Nick Skeres and Brother Auguste.

2. Is this your first go around at the Rorschach rodeo? If no what have you done for us before? If yes, what has surprised you the most about working for us?

This happens to be my first time round on the Rorschach Bus. I'm most surprised I haven't been chased out of the theater by an angry mob. But the production is still young...

3. If this play were a Beatle which one would it be and why?

Ringo. Not enough attention, probably a little overlooked----very lucky, and I think that something about this play screams : Octopus' Garden.

4. What feature of Marlowe's London should Rorschach duplicate to really enhance the audience's experience?

The cast hasn't acquired enough "disease" if you get my drift. God knows I've been trying, but I'm only one man. Furthermore, I'd like to see more pirates. And Midgets.

5. If you could go out for a wild night on the town with Kit Marlowe, where would you go and what would you do?

Kit Marlowe living up the night life? Staying up late reading Ovid by candlelight, eating apricots and talking, you know, the usual...That or Tijuana.

6. Can you think of worse way of being killed than being stabbed in the eye? If so how?

I tend to think that the flaming hot poker in the bowels would be pretty bad, but SOMEONE wasn't willing to experiment. Could you imagine how THAT torture scene would have looked? I mean, really? Searing everything up in there.... Wow.

Posted by DCepticon at 6:48 AM