From time to time I like to share some of the arty pictures I take in the world with you my Marianne Faithful readers. It's a tower in Gettysberg by the way 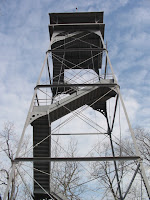 This is our 500th Entry here on the Rorschach Blog and as in the past I will list off some of my favorite entries of the past 100 or so, but first some house keeping.

We are ahead in the DC Theatre Scene's Peoples Choice Awards in both Best Play and Best Actress, but there are still 2 weeks to go before the polls close and we seem to have bottomed out at 22 or 23 votes. We need more. So figure out the best way to get more votes people, without cheating that is! VOTE HERE!

Tim Getman was interviewed by our friend Jane Horowitz forabout his past in Woolly Mammoth's upcoming production of The Unmentionables. Read what Tim has to say about missionaries and his parents from last Wednesday's BackStage Column in the Post. Scroll down to the part of the article where is says Culture Clash for the interview.

Posted by DCepticon at 7:05 AM