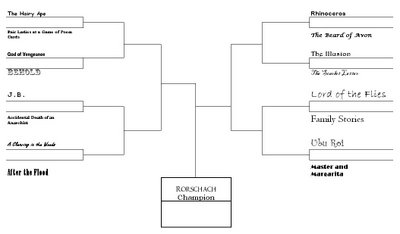 Play at Home with your Friends.
Click image to enlarge.
Posted by DCepticon at 11:15 AM

I have to face myself in the first round? And Beard of Avon gets an 8 seed? What the hell? In fact the whole east bracket is a sham, all three top grossers are in that bracket, thats like putting Duke, UConn, and North Carolina in the same region! We need a new selection committee.

is it a competition based on gross?

How else are we to judge power, it's equivalent to RPI rankings. so the competition is not, but the seeding should take it into account.

seeding based on gross is understandable
as for basis of competition...that's tough...

We all face each other in the first round. As for the basis of the bracketing. Jesus Christ people there is no way to actually play this game.

You totally can play this game! Just have peole fill the ballots out, collect and score. Then release the brackets once a week until a winner is crowned.

Of course you would have to set up rules and regulations. And it could only be played every four years.

but score based on what? is the bracket thus acting simultaneously as a ballot?

essentially yes, but thats why you need a rules committee. evaluating theatre always comes down to opinion, so take the colective opinion and try and find consesus - it rarely works, but it could be fun to try. or we could just go back to doing our jobs.

BASED ON TOTAL BOX OFFICE...

ELITE 8:
* FAIR LADIES VS GOD OF VENGEANCE
* ANARCHIST VS AFTER THE FLOOD
* BEARD OF AVON VS THE ILLUSION
* LORD OF THE FLIES VS MASTER AND MARGARITA

FINAL FOUR:
* GOD OF VENGEANCE VS AFTER THE FLOOD
* BEARD OF AVON VS MASTER AND MARGARITA

FINALS:
* GOD OF VENGEANCE VS BEARD OF AVON

lord of the flies. LORD OF THE FLIES! bitches.

Beard of Avon gets gored by a Rhino in Round 1. Sorry faux shakes, the rhino reverberates even now from its destroyed greenhouse of searing heat and acid concrete.