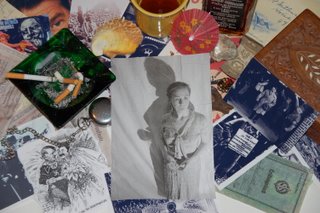 Had ourselves a little photo call this weekend. Above you will see the result of a couple of hours of hard work and a lot of scrambling before hand. The beautiful Linday Allen met up with Jenny, Randy and me for a photo shoot at Casa on Saturday to take some rather stunning pictures. Using all of the film noir training I received by watching Double Indemnity last Wednesday, a white sheet, a borrowed camera and an overhead projector, I took some great pictures of Lindsay and her shadow. Costume designer Frank came up with just the right look for Anges and Lindsay did up her hair in a very period style.

Next we took the picture and printed it out and laid it on this carefully constructed 3-D collage of images from the world of the play. Hopefully it shows Agnes in her room with the rest of the world going on around her. At least that is what I meant for it to do.

Posted by DCepticon at 7:12 AM

We've had a lot of satisfied customers in 2012; we plan to close out the new year by offering some really cool stuff! rorschach costume.