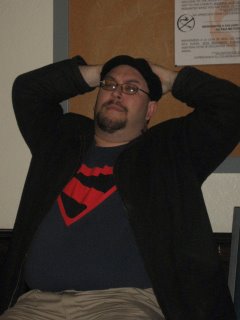 When we were working on The Beard of Avon, I asked the cast, designers, director and crew to write about the challenges they face bringing a role to the stage. I extend that same offer once again and I mean that. Don't think this is just my place to post but everyone involved in the process.

I don't want to turn this page into a place where people come to whine but I do want this page to reflect the challenges as well as the successes that are faced when mounting a production. Today I want to talk about my own particular challenge as an actor. I have trouble learning my lines.

In the theater there is a sort of running joke about little old ladies and kids coming up to you after a play and saying "How did you ever learn all of those lines?" Most people laugh about that, I have always been the one person not laughing(OK, I laugh a little, but that is only to cover my pain. Sorry this just started to sound like an after school special, but I have had this problem since I started acting in 9th grade).

For whatever reason I have the hardest time getting my lines memorized. I tell people it may in fact be a trade off because I don't to do the kind of vocal work other people do, but I have to work my ass of to get the lines in my head. It makes me feel uncomfortable having to carry the script in my hands as the rest of the cast is near letter perfect and it has sometimes led to conflict with my fellow performers and directors. I have turned down uderstudy jobs at theaters because I know that I will have to torture myself to learn lines for something I may never get to perform and I can't imagine doing that to myself or the idea of putting anyone in the position where I may not come through for them.

Does it limit me? Yes it does. Am I faultless in this? Not entirely. I have made this into such a daunting task that I dread a new script.

I used to paraphrase a lot and that has gotten better over the years. Now realizing the words are there for a purpose, but I am still the slow one and I worry that it will only get worse the older I get. This isn't a cry for pity but an attempt to explain what I am.

Posted by DCepticon at 7:09 AM

I personally have a couple of line-learning habits,
My favorite is using my little tape recorder,
I sit down and record all of the speeches in order (which is a little awkward during non-monologuey bits, but oh well) and then I listen to it on the metro, on buses, etc. with my headphones.
I figure even if I am falling asleep, knitting or reading while listening, the lines are still working their way into my subconsious and will be easier to remember.
The only possible problem is drilling myself into some sort of line reading, so I try to record them in as neutral of a tone as possible like reading a grocery list.

Twirling a staff above my head on the palm of my hand while managing not to concuss Patrick or myself...HARD. Makes me wish I paid more attention in Ninja Death Camp.

just become a designer.... once the pressure is off, you suddenly learn everybody's lines with ease. sometimes too easily.

i feel your pain. until i came to terms with having a.d.d., learning lines was like pulling teeth. self-discipline wasn't (& still isn't) one of my strong suites. in fact, after being accused of being a stoner because i couldn't rememeber my lines, i really felt hurt by that. but i worked harder & turned it into something positive. needless to say i never worked for that negative company again by my choice. but the little tape recorder from radio shack works like a champ. you can also get an adapter for it that will play a cassette-sized device on your car stereo, so you hear yourself while driving, because i think it's illegal to drive with headphones on. i played salieri in amadeus (my thesis role) & the ONLY way i got those lines was by tape recorder: under the pillow while falling asleep, in the car, & believe it or not--while juggling. try running a 5 page monologue that opens the show while consistently keeping 3 balls in the air! also, think ACTION! what's the next ACTION? your struggles identify you as a human being...don't beat yourself up over it just work hard & it'll happen. i look forward to the show!

this is really cool. i was thinking recently that line studying techniques are never really covered in theatre departments (as far as I've heard) and rarely discussed among actors.
we take it for granted.

because we all learn lines (and everything else) in various ways, it's good to hear how different people slog through this necessary chore.

i've used a tape recorder in the past but this time, i just read the speeches from the page over and over (in a neutral tone, like gwen) and at a very fast pace. then i learned them one thought (usually a sentence) at a time, and breaking those down into 2 line segments.

from there it's a lot of repetition. it also helps me to memorize a summarized throughline for a speech that'll take me from thought to thought--it sort of strings the whole thing together.

Dude, I too have an extremely difficult time memorizing lines. I've learned that my main reason is because I am afraid to paraphrase...I wanna get every word right...so I end up holding on to the script much longer. I dont think I have a technique but somehow I manage to learn them. For this show though, the last couple of scenes have been especially difficult. Is it lack of focus?

I'm not in the play. I have no script, and I've found it very difficult to learn lines because of it. I sit for hours trying to figure out what to say, let alone how to say it. I don't think it's a lack of commitment, but I can't be sure.

is that the professor of funny?
cause I personally am sad he is not in this play.

another memorizing lines thing:
i like to write them out in my own hand. this is messy and takes forever. but i like it anyway.

Thank you all for your advice. As to the Professor. Thank God you are still out there man. We need laughter in these dark and boring times.

Hey, I'm one of those people with problems memorizing lines. And I didn't use to. You should know that, since we toured together for two years. Now I'm some old fuddyduddy who cries out for line a day before previews. I think it gets harder with age, that and with the chronic alcoholism. Oh dang! Inside voice! Inside voice!