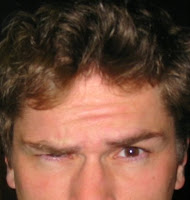 Here is a treat for a Tuesday. Patrick Bussink actually answered these questions for the blog in November and like the bubble head that I am I have not gotten around to publishing it until today. Sorry Tricky, but I am not perferct, nor is my grammar (see below).

There is only one Rorschach Company member I have known longer than Patrick, but Patrick and I go back a ways and I think fondly of the time we were stranded in a snow storm on Rt. 70 West and were forced to consider which tour member we would eat first if human predation were the only means of survival. Thank God the road opened up or DC audiences would have been denied the acting talent of Mr. Jesse Terrill.

Patrick has been in three Rorschach shows, and has given three memorable perfomances. A talented comedian and a skilled dramtic actor, he has toured around the world on a bike and was responsible for the one time in the last 10 years when I broke on stage. We are lucky to have added him to the Company this year. Now another Profile to Discourage, Patrick Bussink.
1. Place of birth?
Annapolis, MD, the undisputed boat-people capital of the universe.
2. First experience in theater?
6th grade production of Goin' Buggy, a musical about bugs marching on Washington for equal rights. I played an innocent spider, delivering a stirring monologue about insect oppression after "scaring" Little Miss Muffet away from her tuffet---what a spaz.
3. Where you went to school?
Great grammar, Mr. Decepticon---where YOU went to school? (Editor: Bite Me!) Me: Annapolis High, Anne Arundel Community College and Towson University.
4. What do you do?
Act, write, eat, sleep. Rinse and repeat.
5. What was your first experience with Rorschach?
Grady Weatherford showed up at a party with makeup from Rhinoceros on, it looked like gangrene. And I thought to myself "Wow, I really have to work for these people." My 1st actual show was J.B.
6. Company member you would most like to be if you were not yourself? 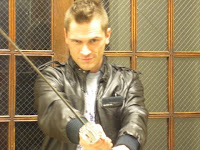 Maggie Glauber. 'Cause she's got MOXY.
7. Some story about working on a Rorschach play that either made you laugh or touched you deeply?
Touched me deeply: the backstage conversations during J.B., which opened right after 9-11. I will "never forget" that.

Made me laugh: just about anything that happened backstage, onstage or upstage during The Beard of Avon.
8. Where do you think Rorschach will be in the next ten years?
Hopefully in its very own magically rough space.
9. What is your favorite Rorschach show that you were not in?
A Bright Room Called Day, even though Rahaleh directed it.
10. Scott McCormick harmless adolescent or world conquering super villain?
Scott McWho?
Posted by DCepticon at 6:30 AM

Let it be known that I had to go to parties with the make up on because there was no shower facility at the abandoned Hechinger's, which is now the Best Buy on Wisconsin. It was not a despite plea for attention - that was the performance.

You would eat Jesse? Jesus there is nothing to him.

Someone like Nick Stevens or hell even me. At least there is some meat on our bones, and we are not as talented as Jesse so there is that also, and we have been marinated in fine whisky and beer!!

Bill,
Sorry for the confusion, this was before there was a Rorschach back in the winter of 1999. And our decision was based on who would go first if we froze to death.
If we had known either you or Nick at the time I promise you that you would be given all due consideration.
-DCepticon