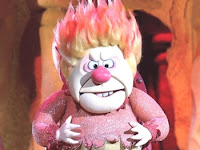 Rorschach has made a deal with the Devil.
After flirting with the Dark Lord in productions like JB, Master and Margarita and A Bright Room Called Day, Rorschach has finally struck a sponsorship deal with the Prince of Lies that should allow us to continue producing well into the next Century.
Co-Artistic Director Randy Baker has agreed to sell his soul and that of 15 DC actors to Old Pitch himself in exchange for the Standard Fame Fortune and Glory Package.
Satan (seen here in a rare photo from his appearance in a 1970s Rankin and Bass holiday special) appeared to Randy in a dream with the standard black poodle and smell of sulfur and what may or may not have been brimstone. Lucifer apologized to Randy saying he was actually lost on his way for a follow-up call to a residence near the Naval Observatory. Randy asked the Dread Lord to stick around for a couple of minutes and proceeded to implore him to take his soul in exchange for a performance space and Hell's Sponsorship of the next 100 Seasons.
Randy says this will have no effect on our play selection, since we had already planned at least 3 shows for next season to include the Devil. Randy says that the Ruler of the Nether Regions was quite impressed by Rorschach's already tainted track record of nudity and foul language in a former church sanctuary. Rorschach now takes it place besides other Hell sponsored companies, such as Monsanto, Lockheed-Martin and Disney.
Randy also sweetened the deal and got a promise for 3 more seasons of Battle Star Galactica. Unfortunately, not having read the fine print, Randy was actually fooled and instead of the New Battle Star there will be 3 more Seasons of the infamous Galactica 1980.
Randy was quoted as saying "Damn it!"
Posted by DCepticon at 6:11 AM

I like this blog is fantastic, is really good written. Congratulation. Do you want to see something more? Read it...: Great investment opportunity in Costa Rica: houses for sale, homes for sale, investment property. Visit us for more info at: http://www.jaco-bay.com/

Mr. Heatmiser is NOT the Devil.

That is who Randy said he saw. I don't make this stuff up. Well I do but I go with the most convincing photographic evidence I can find to make it seem true.

He has been a little different lately....