Photo Shoots and the Setting Sun 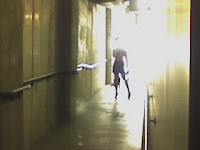 Things slow down here at the old blog if your's truly isn't in the theater with the crazy kids trying to put on a show. That doesn't mean that things aren't happening, it is just that the information I have to impart is almost always of the marketing/press variety.

Marissa Molnar is a beautiful woman and she was kind enough to do two photo shoots for birds. The first shoot didn't turn out so hot.

Several months back we tried to shoot the post cards for the three remaining shows in Season 7. 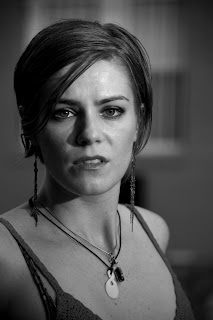 A group of about ten of us (models, photographer, costumes designers, Artistic Director and Marketing Director) all gathered in various stages of undress in the lobby of Woolly Mammoth to make us some art.

You all by now have seen how fantastic the images for Rough Magic and References . . . turned out. Well we also made an attempt at shooting birds that day as well. I have included a sample of what we were trying to achieve above, for some reason I haven't got any actual shots from the original shoot. The concept was as straight forward as my mind allows me to be. Marissa dressed as a prostitute with feathers sprouting from her body in various locations, shot down a long hallway with light in front of her and a trail of smaller feathers like bread crumbs behind her. Well let's just say this is not an easy thing to do and the final product by no fault of the model or photographer was crap.

So we needed to do a new shoot. Marigan and Marissa were champs. Marissa dusted off her streetwalker best and Marigan made the trek from B-more through thunder storms and traffic on 95 at rush hour to get to Jenny's place before the sun set in the alley behind Casa. It was a close call and we didn't get in the alley until after 7pm.

As you can see by the examples I have been doling out, the effort paid off. There will be several things done to the shot by our graphic designer Carrie before it is finished but a combination of talent, genetics and Jenny standing with a reflective dish in an alley trying to catch the light of a setting sun, made for some fantastic pictures.

Thank you to everyone for not just helping to fix something but in making it a whole lot better.

Posted by DCepticon at 6:17 AM