A Man on Fire 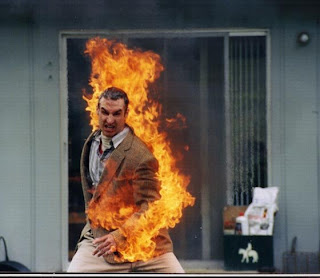 Well folks, we are into the third week of our run of Rough Magic. We have shows tonight, Friday and Saturday. I know some of you still have not seen the show. I know all of the excuses and I except three of them. I will let you guess which ones.

Another review came out today from Rich See at Curtainup.com. Rich says:

Mr. Aguirre-Sacasa's writing is pithy and ironic, as he weaves a tale of love, magic and horror — with a bit of drag and sarcasm thrown in.

Here is the link to the rest of the review.

We get this contribution from the invaluable Gwen Grastorf. She has changed tacks and focus on our usual get to know the cast section and given us the 411 on our design team. Today we start the series with fight choreographer Casey Kaleba. He is the one on fire above. I will let his words speak for themselves but bonus points for remembering Captain Carrot and the Zoo Crew, Casey.

Hi Scotty,
I'm going to be sending you some production staff profiles, feel freeto save them up and slowly 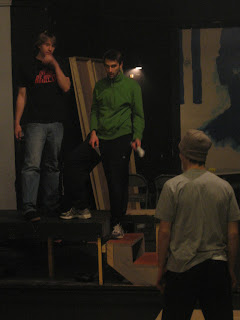 mete them out over the next few weeks.
Here's one for Casey, with some pictures attached. Casey on fire and Danny, Dustin & Casey working on a fight. Blog it up.
-Gwen G.
PRODUCTION QUESTIONNAIRE OF DOOM:
1. What is your position working on Rough Magic?
Fight Director
2. How did you get involved with Rorschach and this show?
Jenny asked Randy to ask me about this show. I became involved with Rorschach a year ago with "Fair Ladies..." when Deb and JT mentioned me to Randy, or Randy to me, or both...
3. So, where are you from?
Navy brat, so all over...but mostly DC.
4. Tell us about your day job(s):
Actually, this is my day job. Sort of. I'm a doctoral student at UMD-College Park, so I teach theatre history and read books. I teachstage combat for Imagination Stage, the Shakespeare Theatre, and UMD...as well as workshops and lectures at other schools and theatres. And I fight crime at night dressed as a primary-colored elk. Mostly I fight crime around the house. Littering and stuff.
5. What other theater companies have you worked for?
Bay Theatre, Folger Library, American U, Catholic U, James Madison U, Davidson College, Chespeake College, CC-Baltimore County.
6. What aspect of this show are you most excited about?
The supercoolness of the actors doing overly complicated fights, of course.
7. If you could be an illegal substance and/or activity, what would you be and why?
I'd be a violation of intellectual property rights. Or an eighteenth century highwayman. There's less chafing with the first one, though. 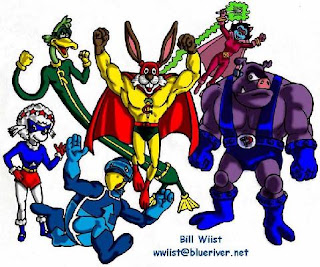 8. If you could be a comic book character or a superhero/villain, whowould you be and why?
I was a big Ninja Turtle fan, from issue 1 through the New Yorkseries, which came out right as the comic market was collapsing andthe stores near me stopped carrying obscure titles like that. But probably I'd like to be the duck from Captain Carrot, because he had asense of humor. And that was one fetching poodle.
Posted by DCepticon at 6:33 AM