The blog has always welcomed the contributions of all the members of the Rorschach Family. Company members, designers and even long time patrons have contributed to this page from time to time, but let's be honest most of this stuff comes from the head of your's truly.

Well in order to avoid you getting sick of me and vice versa, I put out a call for contributions to the blog this morning to the men and women who will all be bringing life to Rough Magic. The out pouring of support was staggering to say the least. What does this mean to you the reader? Well for starters it means no more animals in Santa hats. But the real thing you can all look forward to is the opportunity to see how other people in the Rorschach world view the process and how they all work to bring our Wonderful Monsters to life.

What you are about to read comes from my friend Gwen Grastorf. Gwen will be acting in this show following her memorable turn as both lady in waiting and deadly weilder of sharp death in Fair Ladies at a Game of Poem Cards. The photos are by set designer Eric Grims. Enjoy Gwen and her take on First Read, Table Work and Early Rehearsal. I especially like the last paragraph.

The cast and crew of Rough Magic met en masse for the first time on Sunday night. The Sanctuary at Casa Del Pueblo was a little chilly when we first arrived, but the bounteous display of cookies, crackers, and fruit on the edge of the stage kept everyone in a good mood. We gathered around two long tables with our snacks and got started. 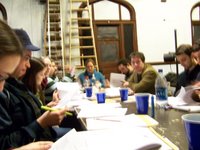 Jenny had everyone introduce themselves, and then we all settled in as she shared her ideas about the play with us. She told us why Rorschach picked this particular show, and how the play would fit into the Shakespeare in Washington Festival. Jenny talked about meeting Roberto Aguirre-Sacasa and discussing with him his other works, as well as the previous production of Rough Magic.

Megan (our stage manager) and Randy (the producer) passed around a lot of the necessary paperwork; contracts, schedules, practical information, emergency contact forms, and all other manner of Word documents. We were told about the policies and safety rules of the building, and briefly discussed some scheduling and ticketing specifics.

Then, the fun stuff started. Design presentations are the first chance for everyone to see what the designers have been working on. It's exciting to finally get a clear visual idea for the show, instead of just the words on the page. Eric (the set designer) passed around a sketch of the set, lots of research images, and several color prints from comic books to show us the style and palette that he'd be working with. Deb (our props mistress) talked about finding objects with a stylized, outlined comic look to them. Matt (the sound designer) discussed the types of music he was thinking about using, and how sound effects would heighten the magical moments in the play. Jenny read a statement from our lighting designer, who was absent. Frank (the costume designer) gave us all a lovely presentation. The colorful costume sketches elicited the most riotous response from the cast, mostly due to the exciting pictures of the drag-queen Furies.

Our dramaturg, Rachel, also handed out a very helpful packet of research. The information in a dramaturg packet can include anything from background on the characters and their locations to definitions of words, notes on historical context, or pop-culture references. This play contains characters from Shakespeare, Shaw, Greek tragedy, and Little Shop of Horrors - so it's important that we all understand where they come from. 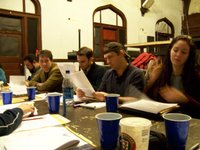 assistant director) filling in for a missing cast member. It was great to hear everything out loud, and there was plenty of laughter and helpful commentary from around the table. At the end of rehearsal, we talked schedules some more, and a few lucky participants went home with the leftover Oreos and soft-baked Chips Ahoy!

Jenny, Ryan, Cecilia (our assistant stage-manager) and most of the cast all got together for a little table work on Monday night. Table work is a good opportunity for people to ask questions about the text of the play; plot twists, character relationships, or anything that doesn't seem to make sense. We discussed the style of the play. The question was raised as to whether or not having a comic book aesthetic means that you have to lose the real human interaction between characters. Aguirre-Sacasa's writing is very cinematic and fun, and the characters often veer towards archetypes: the villain, the damsel in distress, the young innocent, the sassy drag queen. It is important to all the actors that we work on two levels, both maintaining the play's adventurous tone and doing justice to the real emotions and motivations of the characters. We tossed around some ideas about how to make things more clear onstage, and Jenny and Ryan wrote down a few questions to ask the playwright.

Last night, we had a first rehearsal for a couple of scenes at the Casa. We started at the end of the play, with one of the last scenes. Jason, Vas and I read through the scene a few times, and Jenny and Ryan asked us some questions to make it more specific. We got the scene on its feet and tried out a few things. At this stage in rehearsals, it's more important to experiment than to set anything in stone. Vas did a valiant job of silent acting (he has no lines in this particular scene) while Jason and I juggled our scripts and some loose blocking. We ran the scene a few times to cement it in everyone's minds, then switched to working on the opening monologue.

Jenny noted that one of the most delightful/crazy things about working in the Casa del Pueblo is that it's filled with evidence of all the previous shows. From the smeared chalk on the back wall (Zillah's apartment in Bright Room), to the electric fans suspended on the right wall (to cool the audience during Arabian Night), to the scrap of black fabric Jenny was using as an improvised bookmark (from The Scarlet Letter ), the theater is like a living scrapbook. If Rorschach eventually has their own performance venue, I have no doubt the lobby will be upholstered in old curtains and costumes, with the audience waiting on old setpieces hither and thither.

Posted by DCepticon at 1:13 PM

I have to say that table work session was probably one of the most interesting, and best discussions of a play I have had with a group of people in a long time. Seriously even when the conversation turned to Buffy the Vampire Slayer. This show is going to be amazing...tell your friends