Today's blog entry is written by Ed Xavier, an actor in LICKED, Gwydion Suilebhan's adaptation of the urban legend, "the lick." 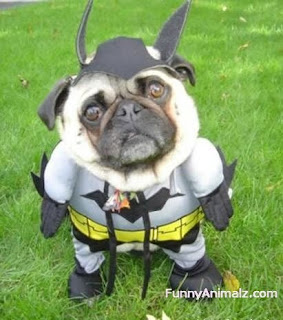 Because after you see this show... you will never think of dogs the same way again...

Don't miss MYTH-APPROPRIATION: URBAN LEGENDS, this saturday at 6pm, 8pm and 11pm. Get your tickets here.

The play is inspired by an urban legend in which a woman climbs into bed with her faithful dog asleep at the side of her bed. During the night, she is awoken by the sound of a dripping from the bathroom. Fearing the presence of an intruder, she reaches down alongside the bed where her hand is met with a reassuring lick. Comforted by the dog's presence, and reasoning that he would have left to investigate had anything been amiss, she falls back to sleep. A while later, the woman is again awoken by the dripping noise. Reach, lick, reassure, fall asleep again. The third time this happens (everything happens in threes in these stories, but that's a topic for another day), the woman chooses to investigate. She goes to the bathroom where she finds her dog eviscerated and hanging in the shower, blood dripping into the tub. On the mirror, written in the dog's blood are the words, "Humans can lick, too."
The moral implications of this story are unclear to me. What is the listener supposed to learn by this cautionary tale? Would her dog be alive if she let him sleep in the bed with her? Did she forget to lock her door? And how is she ever going to get all of that blood out of the tub? This legend brought to you by the makers of Comet and other fine household cleaning products.
Gwydion Suilebhan has taken this legend and used it as a jumping off point to e 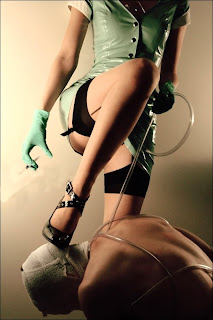 xplore the theme of betrayal. As the woman of the legend is betrayed by her own false sense of security and control of her environment, so is the heroine of "Licked." The play takes place in the home of The Mistress (Jessica Hansen) on the evening before she names her favorite: her long-time faithful servant (Nick Greek) or her sexy, new boy-toy (Adam Segallar). Of course, I'm biased. As her faithful Man-Dog, I'm pretty sure that no matter which one is named as favorite, I have a special place in her heart that neither of those guys can take away.
Posted by Randy Baker at 10:17 AM