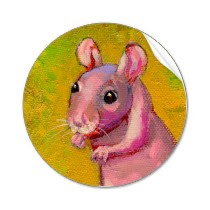 Anticipation. One of the things that I love about this process is this first day. I could not wait to see what Steve came up with for this myth. To be quite honest, last night was the first time I had ever heard of the Mexican Dog/Rat Myth. Basically, a woman travels to Mexico and finds a stray dog on the side of the road. She takes pity on the dog and feeds it. She ends up smuggling the dog back to the US and upon her return the dog needs to go to the vet. The vet informs her that the creature is in fact not a dog, but a large Mexican Sewer Rat. Other versions have the dog/rat feasting on the woman's children. I was very curious to see how Steve would turn what I saw as a ridiculous story into something dramatic and compelling. He did, and it is hilarious...but, you will have to wait until Saturday night to see why.

Urban Myths seem to always play upon a fear that most people have. In this case, the myth of the Mexican Rat seems to be play onto that fear of the "other." During our first session together, we were asked to share a personal story about an urban myth. Immediate fear surged through my body. One because I do not like to talk in big groups of people. Two, because I thought I had no real connection to urban myths or legends. Growing up I knew that stepping on crack would not in fact break my mother's back. I had no problem eating pop rocks and coke together. Later in the evening, as I thought about this some more, I realized that scary movies in their basic premise are Urban Legends. They are stories that play upon our fears. I might not have ever believed that Bloody Mary would jump out of the mirror and kill me, but I definitely been scared shitless by stories around a campfire or at a sleepover. And then I remembered my story:

During high school I worked as the properties manager in the theatre. When I started as a freshmen I was told that there was a ghost in the theatre that would always appear during a show over the headset. You could hear this sequence: Brahm's lullaby, a baby crying, footsteps, baby stops crying, Brahm's lullaby, louder baby crying, louder footsteps, baby screaming, silence. Anyone who told me the story swore up and down that they themselves had heard it and it was terrifying. Of course there were stories about a baby being murdered where the school was built. This story changed everytime I heard it. Now, to be honest, I had been on that headset more times than I can remember, and I never once heard it. But, I had heard the story told and retold so many times, that I came to believe that I had. Or I could hear it in my head. As I moved through school and other techies joined the mix, I would then be one of the people who would pass this story along. Possibly it is tradition. Or even an initiation rite. Or just simply nothing more than a story.