Alligators in the sewers

I'm a bad person. I missed this morning's blog entry. So please forgive the no longer accurate tenses of Seamus Sullivan's report from the field. Seamus Sullivan wrote NEW YORK WHITE, an adaptation of the "alligators in the sewers" myth.

I'm sitting outside the theatre and listening to the late show of MYTH APPROPRIATION: URBAN LEGENDS play behind the door. It's a terrific night of theatre and the coming together of 40 artists to create something like this reminds me of why I love this job.

Check out the blog on Monday for some pictures of the event itself. Until then, enjoy Seamus' blog entry...

******************
Since Jenn and the cast will blow your collective minds tonight with the actual play, I thought I'd give you a preview by writing about how the script for "New York White" came to be. It begins with a severly underappreciated man in early 20th century septic history. 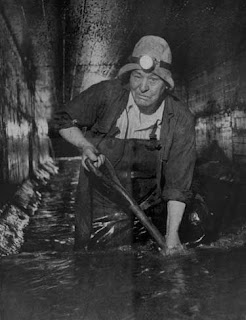 One of the first things that stuck out for me about our assigned urban legend, the one about alligators in the sewers, was that the sewers in question are always in New York City. I had to wonder- what was it about New York's sewers in particular that made them so alligator-worthy?

At least part of the answer turned up in the the form of one Teddy May, who served as New York City's Superintendent of Sewers in the 1930s. His firsthand (and probably embellished) account of fighting alligators in the sewers in Robert Daley's 1959 book The World Beneath the City is one reason the gators are so pervasive among urban legends. May told a number of apocryphal stories about the sewers in which he discovered murder weapons amid the sludge and testified against the owners in court, or recovered a $25,000 ring lost by Ulysses S. Grant's daughter. His appearance was better suited to tall tales than real life; in pictures he droops like a cartoon basset hound, and one eye, fused half-shut by a steam line mishap, is permanently winking. In The World Beneath the City, he doles out malapropisms like candy:

'Linoleum, to Teddy was "rineoleum," and he sometimes spoke also of "sympathy" orchestras, "horowitzers," and of two men "getting between ya."' And so on. My skills as a researcher are modest, but I have yet to locate a scrap of information on Mr. May, verbal or pictoral, that is not completely hilarious.

Imagine, now, that you are a playwright on deadline and it is three in the morning. You are half-blind from looking up sewer statistics that refuse to arrange themselves into a coherent play. You can imagine how the sudden arrival of this toothless hero in waders might, for someone in your position, evoke all the glory and fanfare of a redeeming angel's descent from the clouds. The outlines of a play begin to emerge.

Where did such a ready-made character come from, and what quirk of destiny saddled him with the mundane but daunting duty of handling the waste of one of the world's most populous cities? What is it about cities that incubates the likes of May and his gators? I thought about cities and the people who keep them running, and about why we have urban legends as opposed to the regular kind. And I began to write.

See you tonight!
Posted by Randy Baker at 8:31 PM