I Wonder if They Were at the Same Theater 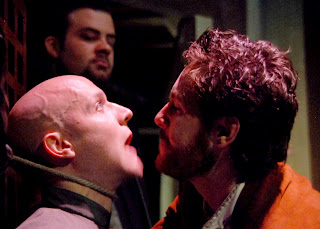 How do two reviewers have such opposite reactions to a play?
I start you out with a critic's love letter to Kit Marlowe from Tim Treanor over at DC Theatre Scene. Tim encourages folks to stop reading his review and rush out and get their tickets right away. He goes on to say:
Kit Marlowe flies, with scenes intercutting each other with such facility that they conjure up images of a circus act, with high-wire acrobats.
And what does he say of our cast and in particular our own Kit? Well he has praise indeed:
Segaller is fabulous in the title role: his Marlowe is a man who is constantly giving the whole world a sloppy wet kiss. He may affect cynicism, and he may be cruel, but Segaller’s Marlowe is at all times a huge engine of life, joy and laughter, and there is not a moment in which it seems less than authentic. Indeed, his performance makes me remember the young Tim Curry, playing Mozart in Amadeus thirty years ago. It is that good.
The rest of the cast measures up to this incredible work.
Follow this link to read it all.
But now on to someone who has less praise to show our show, and that would be Nelson Pressley over at The Washington Post.
Nelson just doesn't think that we soar as high as the script does. He does however find some praise for the script and our production:
Grimm appropriates Marlowe's trademark power as often as possible, especially as the story turns dark.
. . . it played several years ago in a campy, over-directed production that the playwright was moved to shut down. At least the play looks more substantial this time -- and for the ravenous Marlowe fan, it will serve as a decent appetizer for the meal to come.
Read what else the Post had to say here at this link.
Posted by DCepticon at 6:41 AM

"[F]or the ravenous Marlowe fan, it will serve as a decent appetizer for the meal to come."

I love it when critics try to impress everyone with their brilliant prose.

This is good too: "The rest of the characters come out watery[.]" Kind of like a casserole that's ripped from the oven before its time.

Oh well, at least he spelled the names right.

I love it when John Lahr gets love. But talk about a random bit of praise. Besides we love TIm Treanor and Nelson like anyone is entitled to be wrong every now and then. Remember how much he loved Bright Room?

Pressley's critique was unfortunately steeped in a lot of generalizations, and seemed to focus more on his own prose than on the actual production, but to each his own. Hey, if he can critique us, we can critique his critiques!!

Well, maybe I shouldn't have said they all suck sweaty nut sacks, But for the most part the critics in this town, with the exception of Trey at City paper, are in love with how their pieces read instead of offering a true opinion of the show. Trey's reviews I find to be the best written and the most informative. He doesn't spend 90 percent of the piece stating plot and 10 percent reviewing the show.

I wont even begin to say how bad I think Celia Wren is as a critic.

And none of them touch John Lahr.