Get to Know David Grimm 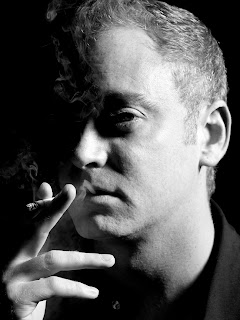 I love the fact that we have gained the participation of living playwrights on this blog. Of the last three shows we have done we have gotten repsonses and contributions from all three of them. Well let's put a fourth on the board, because we get to hear from Kit Marlowe playwright and the star of my favorite broadcast of Studio 360 ever, Mr. David Grimm.

While answering the Get to Know questions David makes reference to the previous production of Kit Marlowe in DC. We all know it existed and many of us know folks who were in the thing. I will not discuss it here, because it has nothing to do with the show and production that we are presenting, but David brought it up. For what I think is a very fair statement of the events that surrounded the last DC production, I direct you to this episode of NPR' Studio 360, Editing, Glenn Gould and Kit Marlowe. Click on the Kit Marlowe link when you get to the page. While there is no comment by the theater involved in the situation, the reporter does a fair job of presenting the facts of the situation and David is fascinating to listen to as he discusses his play. The program lasts about 7 minutes and now Get to Know David Grimm.

Thanks for sending this!!!
here ya go...

1. What is your position, role or roles in Kit Marlowe?

2. Is this your first go around at the Rorschach rodeo? If no what have you done for us before? If yes, what has surprised you the most about working for us?

This is the first time Rorschach has done a play of mine. I'm very much hoping to be able to come down and see the production, as the last time it was done in DC wasn't exactly.... well, let's just not go there.

3. If this play were a Beatle which one would it be and why?

4. What feature of Marlowe's London should Rorschach duplicate to really enhance the audience's experience?

5. What was your best/worst haircut or body modification for a part in a play? For the designers what is the weirdest thing a director ever asked you to include in your design?

The last time "Kit Marlowe" was done in DC...by a certain theatre which shall remain nameless.

6. If you could go out for a wild night on the town with Kit Marlowe, where would you go and what would you do?

Dinner and drinks at a tavern, a walk along the embankment, then home to Norton Folgate for some really dirty sex.

7. Can you think of worse way of being killed than being stabbed in the eye? If so how?

The last time "Kit Marlowe" was done in DC.... by THAT theatre.

David also wrote a response to the quote I use in my email signature:

"Appearances are everything. The rest is merely fact." - David Grimm
Posted by DCepticon at 7:22 AM

Holy Kit Marlow! We are reading Mother Night in my book club right now. I have been quoting that line all week. Crazy.

My favorite book by Vonnegut. My other favorite lines are about the Nation of Two and "Make love when you can. It's good for you." Yet another is "When you're dead, you're dead." I miss the man. So it goes.

Holy Merde, Rorschach. This interview is pure gold. I think efforts should be made to invite the entire Admin of THAT THEATRE to see Kit Marlowe.