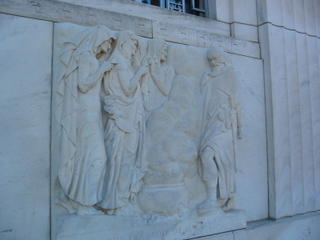 I think whenever we theater folk get around Shakespeare we tend to go a little goofy. For many of us Shakespeare is one of the reasons we got into theater in the first place.

The summer between my freshman and sophomore year in college, Ian McKellen was touring his production of Richard III. I had just taken Acting Shakespeare the semester before and was excited because my professor has procured a bootleg copy of Sir Ian playing Iago in Othello directed by Trevor Nunn for the BBC. Just from watching that video I knew that that was the kind of actor I wanted to be, an actor who gets to play the villain. Not just any villain but a Shakespearean Villain. I knew I had to see this man live and on stage in what was and still is my favorite Shakespeare play.

My friend Rachel got us tickets for a Kennedy Center Matinee. We made our way into the theater and the lights went low. Out came this twisted man, useless left arm placed in his pocket, and a scar across his face. His mouth opened and out came the words that still make me glad to be an actor:

Now is the winter of our discontent, made glorious
summer by this sun of York. -- Richard III Act I Scene 1

This one line has everything; poetry, irony and a pun all within one sentence. And Sir Ian quietly intoned his speech to the crowd as he slowly removed the glove from his one good hand with his teeth, produced a cigarette from a case, lit it and took one long drag and stamped it out. That told you everything you needed to know about this Richard. And it made you love him and hate him all at the same time. Love a man who was telling you his plan to kill everyone who stood in his way, to get what he wanted. It is the perfect balance between performance and text. Shakespeare can make an actor into a king or queen and all they have to do is speak.

A couple of years later I got to play Richard III in a small community theater production. I was working as a substitute teacher in Baltimore County and would drive through rush hour traffic to Annapolis nearly every night for three months, because I was being given the chance at 23 to play a role that I quite possibly will never have the chance to play again. That is what Shakespeare is to me. And I bet if you ask other actors you will find similar stories.

Even bad Shakespeare, and let's face it there is bad Shakespeare, is something which has stood the test of time. Despite gapping plot holes, anachronisms, sexism and some would argue racism, Shakespeare speaks to every generation.

For over four hundred years women and men have spoke his lines in nearly uninterrupted succession around the world. When a 14 year old girl in Australia picks up Romeo and Juliet for the first time, something wonderful happens. When an English major at a small liberal arts college somewhere reads King Lear for the first time and starts to realize that someday will be old, there is power in that. And when an auditorium of high school students in Lima, OH, see The Taming of the Shrew and realize that Shakespeare can be funny as well as serious, there is something you never forget.

Posted by DCepticon at 6:57 AM

I feel it necessary to add that the 1995 Richard III (with Ian McKellen) is far and away my favorite Shakespearean film adaptation. It was based on the National Theatre production, unless I am mistaken.

Right you are Austin. There were some minor changes between the stage version and the film, most notably the combination of several roles and the addition of 1940s style music. For those of you who don't know Austin is also in The Beard of Avon. He portrays Richard Burbage and Lord Walsingham. Burbage you may also know originated many of the leads in Shakespeare's plays. Including the role of Richard III.