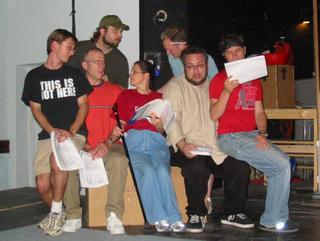 Above is a picture of most of the cast of The Beard of Avon. In this exclusive rehearsal shot we see the courtiers gathered around old Queen Bess herself. From left to right Andrew Jessop, Eric Singdahlsen, Austin Bragg, Wendy Wilmer, Brent Stansell, Scott McCormick, and Patrick Bussink. Two of the people in this picture are playing women but I won't tell who.

In order to create the world of Elizabethan England we will have to rely on a technique employed by Shakespeare himself:

Piece out our imperfections with your thoughts;

Into a thousand parts divide one man,

While we are not dividing one man into a thousand we are doing some dividing. In the business this is called double, triple and in some cases quadruple casting. This is done by all your finer theaters around town, so don't act surprised. I myself will be playing 3 roles and I think some people are already up to 5.

Here is the remainder of our cast Grady Weatherford and Valerie Fenton. Cute aren't they. They will be playing Will Shakspere (not a spelling error) and Anne Hathaway. Please don't hold the expressions on their faces against them it was a very early rehearsal.
Posted by DCepticon at 7:26 AM