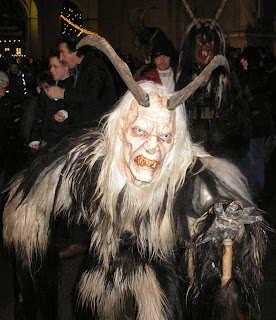 If you're wondering what on earth this crazy picture has to do with Santa Claus, don't miss the return of Rorschach Theatre's extreme new play development event...


MYTH-APPROPRIATION:
The Bloody, Strange and Wicked Origins of St Nicholas

Rorschach Theatre wants to make the holiday season just a little bit wilder. Rorschach will track old Santa Claus back to his religious, pagan and supernatural roots. Looking back to the myths of the Vikings, early Christians and native peoples of Scandinavia and Eastern Europe, Rorschach turns its creative and artistic style on the jolly fat man in red and his larger than life cult of personality.

This is the third edition of Rorschach's extreme new play development project, MYTH-APPROPRIATION, where a group of writers, directors, designers and actors join forces for a week of writing, rehearsals and production to bring 6 fully realized new plays to life for one night only. Previous MYTH-APPROPRIATION projects focused on Grimm Fairytales and Creation Myths of World Cultures.

Seating is limited and these performances sell out quickly so GET YOUR TICKETS NOW!

Remember, you don’t have to wait until this summer to experience the intense performance style and passionate storytelling of Rorschach Theatre. Myth-Appropriation makes for an excellent stocking stuffer and we promise something to awe, offend and entertain no matter your threshold for Christmas plays.