Last year I asked you to vote for one show and one actress in the DC Theatre Scene Audience Choice Awards, this 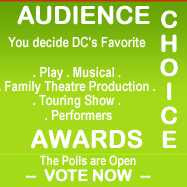 Congratulations to the playwrights, casts, directors and designers of Kit Marlowe and This Storm is What We Call Progress for being nominated for the Audience Choice Awards. And an extra helping of congratulations to Rorschach Company Member Karl Miller star of Storm and Kit Marlowe himself Adam Segaller.

People have already started to cast their votes. Feel free to encourage everyone to vote. Use the above graphic, if you wish. The poll closes September 2nd at 6 pm and will be quickly followed by our Awards radio show.

So get voting people. Explore all you want the other nominations and remember you can vote over and over again.