There is a lot of talk about how luscious our sweet Gwen Gastorf is in her Suicide Girl chic at the top of the play as Linda Summers, our grad student and Prospero groupie. I have decided to let the picture speak for itself. I have hotter shots of Gwen but this is a family blog and I like to hold something back for February Sweeps. 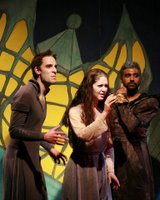 ask for. We at Rorschach have always thought that the internet and blogs in particular are the best way for smaller theater companies to get their name out there in front of our audiences. The fact that we blog should tell you all how seriously we take the power of electronic opinion. That is why I draw your attention to internet reviews just as much as those in print publications. Here is one such opinion we received from a site called Drago Life.

Here is the link to the review, which gives a nice summary of the play and hands out some

superlatives to the cast and their various body art. I do however take issue with one of Drago's comments regarding the lack of staples in the Rorschach Theatre programs. Drago if we started spending money on staples, there would be even less money for things that really matter. I challenge the rest of you to leave me a comment to tell Drago what the money we would spend on staples is currently being spent on. Let's see staples probably cost like $1 for a hundred. Let me use the internet to find out. Wait right here.

Ok, Staples sells 25,000 staples for $4.38. Wow! who knew staples were that cheap? But you got to figure in labor and the man/woman power needed to staple the programs at about 4 hours, even at minimum wage that is like $25. So what would Rorschach have to give up to put a staple in every program?

Leave your comments.
Posted by DCepticon at 7:03 AM

Wait, Scotty, you mean we can't use the secret horde of child-laborers that are in the props loft to do the stapling?? Durn it.

The falsies in the furies costumes.

Gwen- There are no child laborers at Casa, unless you include the whipper snappers in the cast.
HP- There are falsies in the furies costumes? First I have heard of it.

You see, Scott, right away, bringing up the staples issue here is fraught with problems of CONTEXT. You ask, what would Rorschach have to give up to provide staples: well, odds are that most people are going to immediately suggest "pieces of Gwen's costume." And then you have to argue against this obvious win-win situation.

I would like to point out that rorschach theatre does not own a stapler, either. so that has to be factored into the price. also, programs will have to be stapled more than once. the end price would be close to $70. Which is the estimated cost of razors for me and Lee for the run of the show...still want staples?

So let me get this straight... you get $25 from Rorschach for assembling programs? Sign me up!

one colorful adjective and all of a sudden somebody's costume pieces are up for being 'cut'.

If anyone's going to lose falsies, it should be Grady and Lee. Their um.. assets.. are significantly larger and more prominent than mine. And maybe Musnik could use a little bit of revealing as well, I mean it is supposed to be the worst heat wave in NYC's history...

True, Gwen, but there's a big difference between increasing the aesthetic appeal of the show and just making the audience regret their own eyesight.

nobody said anything about actually ponying that money up Jillian. And it would be more like $28, if we were to to pay for such an unnecessary perk. I mean, really? can't keep three pieces of paper together? really? Really!?! born with out thumbs or something? I mean really. Just use your hands to keep the program together, really. no, really.

well, i guess you could take bits from my costume, but i'm pretty perforated as it is. but i am team player. let me know if i can help.

well, clearly stapling programs would mean Rorschach could no longer afford to give alums the classy "we want prenup" tee-shirts for sale on dragolife.

i know Fritzky and Stills were so hoping for matching ones for their fake wedding.

As an occasional program folder and someone who always has something to say (more the latter than the former) I just wanted to note that the unstapled program is a summer um... staple (sorry)in that build your own fan sort of way. It really helps enhance the usually arctic settings for summer show.

And whatever you want to cut from Gwen's costume - for the love of god leave the wig.

should I bring a stapler to the show & donate it to your theatre ? :=)